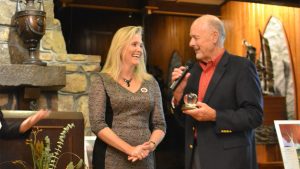 Five years ago, Susy Daria’s upper-level APR class took on Secret Meals for Hungry Children as a client for a semester-long project. The program was started by Alabama Credit Union, and has provided weekend meals for thousands of children in the Tuscaloosa and Alabama community. The class was divided into teams and worked to brand, plan and execute a campaign that would fundraise for the charity. Working with Secret Meals for Hungry Children became a tradition, and eight semesters and countless creative executions later, Daria’s classes have contributed over $100,000 to address the issue of hunger in Alabama’s elementary school-aged children.

“It’s incredible to see these students do good work for a good cause. Their passion and enthusiasm to give back within their chosen profession makes my job as an instructor infinitely easier,” Daria said.

Community sponsorships and partnerships allowed all proceeds from the evening to benefit the Secret Meals program, and a silent auction featured food, jewelry and artwork from local vendors.

“Our partners are so gracious, and they have made it easier for us to continue building relationships,” Caroline Doss said.

The student team hosted community supporters, current and past students, and their own family members, and helped educate guests about the nutritional gap that was created on weekends for nearly 20% of children who live below the poverty line in Alabama.

As the evening’s program kicked off, Sarah Jenks applauded the efforts of former students, “We would not have been able to give back as much as we have without the positive reputation of Secret Meals in the community.”

A slideshow and video compilation showcased the past five years, featuring snippets of what former students had learned and the events they had planned. Fundraisers such as “Hunger is no joke,” “Masterpieces for Meals,” “Secret Sips” and “Hunger Feeds,” raised awareness and money for the Secret Meals program.

“I am lucky to have been given this opportunity to work with a fantastic client and community of supporters,” Daria said during her acceptance speech with tears of happiness in her eyes. The Secret Meals Grand Gala marks the final fundraising event for the semester for Daria’s classes, and she could not think of a more appropriate way to celebrate the program’s past successes, and set a tone for the future.