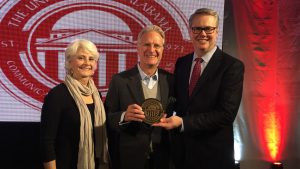 The award is given to individuals who exemplify the qualities of sustaining friendship, unsurpassed loyalty and dedication to the College of Communication and Information Sciences. Since its inception in 2002, only ten recipients have been awarded the Dean’s Medal.

“Mr. William Brock Lewis far exceeds our measures for this special award,” Dean Nelson said. “It has been a privilege to work with Bill since I was named Dean in July 2014.”

Lewis’ passion for excellence has played a monumental role in creating a sustainable brand for C&IS and in shaping its strategic plan. He has served on the C&IS Board of Visitors since 2011, serving as Chairman from 2015-2016. An alumnus of UA, Lewis served as editor to “Forum,” a national public relations magazine and was a leader in student organizations during his time as a student. He graduated with his bachelor of arts degree in 1969 and master of arts degree in 1971. In 1987, Lewis joined with Norma Hanson and Terry Slaughter to build the nationally acclaimed advertising and branding firm, SlaughterHanson.