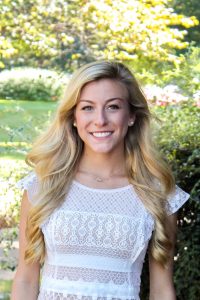 Katie Gatti was selected as a finalist for Public Relations Student of the Year in the 2017 PRWeek Award. The senior, majoring in public relations, serves as director of the Capstone Agency, a nationally affiliated, student-run, integrated communications firm housed in the department of advertising and public relations. She is the first UA student to be recognized for this honor.

“I’m shocked, honored and thrilled to have been named a finalist,” Gatti said. “I feel really fortunate to have the resources in C&IS to help me prepare for the next steps.”

If selected as a top-two finalist, she will be flown to New York in March for the PRWeek Awards, where the overall winner will be announced.

“Regardless of what happens, I’m just excited to have made it this far,” Gatti said. “I almost didn’t pursue it because it was a pretty laborious application process, but I just felt this strange compulsion to do it.”

The application process included a prompt that asked to create a launch campaign for a hypothetical spokesperson character for IKEA North America. The campaign had to be backed by comprehensive research, indicating precisely why this character was a good fit for the company. The next step for Gatti will be pitching the her campaign to a PRWeek news editor.

The criteria for judging entries include creativity, writing ability and an understanding of PR principles and strategy. The judges for this award include a PRWeek senior editor, an educator and an in-house PR department leader.

“I could not be prouder of Katie and am happy she is being recognized for her outstanding work,” said Dr. Joseph Phelps, department head of advertising and public relations. “She is clearly among the top PR students in the U.S., and it is because of great UA students such as Katie and outstanding faculty that this program has been, for seven of the last nine years, among the five finalists for PRWeek’s Education Program of the Year.”