Catherine May Finalist for Student Employee of the Year 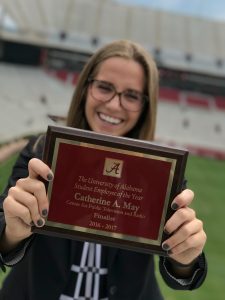 Senior C&IS student, Catherine May, was honored this week by being named a finalist for UA’s Student Employee of the Year Award. May is a journalism major who has worked as a student employee in the Center for Public Television and radio for three years.

The University of Alabama employs over 4,500 student employees across campus. May is one of four finalists named from among the 51 nominees campus wide. A lunch was held in the North Zone of Bryant-Denny Stadium on April 12 in celebration of the nominees.

In her past two years at the Digital Media Center, Catherine has served as a mentor for other student employees. Additionally, she has worked in collaboration on broadcast projects with both WVUA 23 and Alabama Public Radio, steadily becoming a sought-after creative collaborator within the DMC.

“I can’t say enough good things about how easy Catherine is to work with, how well she collaborates with the team and the subjects we are shooting, and how valuable I consider her conceptual and technical skills to the documentary and television productions she’s worked on,” said Rob Briscoe, Executive Producer, Center for Public Television and Radio. “She’s the type of individual that you wait anxiously to hear where she goes and what she becomes… I see Catherine as the example for what other students in the Digital Media Center should strive to be.”

May knows she wants to continue working as a visual storyteller in areas such as documentary, short narrative client work, television or photojournalism. Wherever the future takes her, the years spent mastering her craft in the Digital Media Center have equipped her to live her story with a great head start.