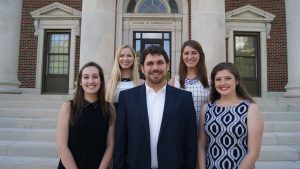 For the second year in a row, C&IS’ Bateman Team has been named a finalist in the Public Relations Student Society Association’s Bateman Case Study Competition.

This year, UA’s Bateman Team partnered with the Campaign to Change Direction, an organization founded in 2013 whose mission is to change the culture of mental health through promoting mental health as equally valuable to physical health, raising awareness of the signs of emotional suffering and encouraging the care of personal mental well-being and the mental well-being of others.

“Working with the Campaign to Change Direction was a great opportunity to get out on campus and face an issue that so many people face, but few deal with,” said Danielle Cassidy, director of insights, strategy and finance for the Bateman Team. “We’re just five people, and we did something. We can all do something.”

PRSSA Headquarters received 67 entries for this year’s Bateman Case Study Competition.  Fifteen submissions received honorable mention, and three were named finalists. The finalists will present their campaigns to a panel of judges May 10 in Chicago.

The finalists for the 2017 Bateman Case Study Competition are as follows:

UA’s Bateman Team placed first overall in last year’s Bateman Case Study Competition. Of this year’s finalists, The University of Alabama is the only returning finalist, but the Bateman Team isn’t feeling the pressure.

“There’s a pressure internally because we’re all driven people—we want to win,” said Lauren Williams, account executive for the Bateman Team. “But we know the University, the College and our adviser will be proud of us regardless.”