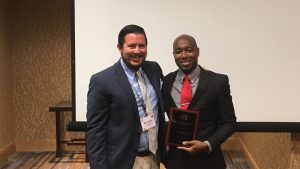 The honor, given by the ICA’s Sports Communication Interest Group, is for a scholar in the first six years of their career who has made a significant impact in the field of sports communication.

Brown, an assistant professor of advertising and public relations in the College of Communication and Information sciences and programming director of UA’s Program in Sports Communication, is the second winner of this honor.

“The ICA Early Career Research Award is a big deal,” said Dr. Andrew Billings, executive director, Alabama Program in Sports Communication. “The fact that Kenon Brown is the recipient of this award is quite telling as he has become a pre-eminent scholar with a bright future ahead of him.

“The award is not a surprise, but should not be understated as it shows that some of the best and brightest communication scholars in the world reside in Tuscaloosa.”

Brown’s primary area of research is athlete image and reputation management, studying the effect that athletes’ decisions have on their public perception and value to their sports organization.

The highly monetized nature of professional sports allows Brown the opportunity to analyze and document the direct correlation between an athlete’s missteps and a decline in merchandising and ticket sales, for example. NCAA regulations make it difficult for Brown, and scholars like him, to study the same areas on an individual level within college athletics.

“I love sports and image repair, but I’ve never really considered myself an influential scholar,” said Brown. “To be able to say that my work has the ability and potential to be influential on an international level is a huge deal to me.”

The Alabama Program in Sports Communication is an interdisciplinary collaboration of different academic programs at The University of Alabama which promote the study of sports communication in its variety of forms throughout America and the world.