A group of four C&IS students immersed themselves into the culture behind Barbecue by touring six southern states and testing out their different barbeque delicacies.

The three-week, Communication Studies interim course taught the history and practices of barbecue, gave students the opportunity to perform their own cookouts, and culminated in a road trip to barbecue meccas across the south. This was the first time Barbecue Communication has been offered at The University of Alabama.

“To truly appreciate how people communicate around barbecue takes experiencing it for yourself,” said Mark Marker, Graduate Teaching Assistant at UA. “There is value to these experiences that cannot be measured by tuition or fees.”

The traveling portion of the course took the students on a trip from Tuscaloosa to Austin; Oklahoma City; Kansas City, Missouri; Memphis and Decatur. 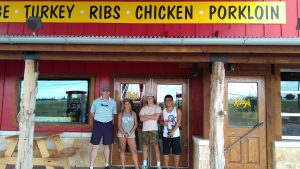 Terry Black’s in Austin was highly favored among the students for their beef brisket, pork and beef ribs, and sausage.

“The brisket there is a work of art. There is actually a subtle sweetness to it, without adding any sauce, and it melted in my mouth. I closed my eyes to shut everything else out while I tasted and took it all in, it was like trying a wine with a variety of undertones,” said Marker.

Other students in the class were: Ross Wang of Hunan, China; Raya Turner of Orange Beach, California and Riley Taylor of Chicago. 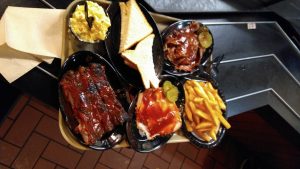 “In China, barbecue is very different than what I now have in the United States,” said Ross Wang, Senior C&IS student. “It is not only about eating, it’s an art that involves a process of preparing, making and eating it.”

Some of the topics discussed throughout the course included the influence of barbecue in politics, the relationship between masculinity, music, social class and barbecue, as well as the industrialization and globalization of barbecue, terminology that accompanies it and the diverse viewpoints of those who prepare and consume it.

Students got to experience the true culture of barbecue by meeting with the pit-masters themselves. They even met with the author of their textbook, “Food as Communication, Communication as Food,” Barry Brummett, the Charles Sapp Centennial Professor in Communication and Department Chair at the University of Texas.

“Barbecue is a human endeavor. Learning about it in an interim course is an experiential learning opportunity,” said Darrin Griffin, Assistant Professor of Communication Studies. “The bonding that took place over two campus barbecues and eating lunch and dinner together for 7 days will not soon be forgotten.”