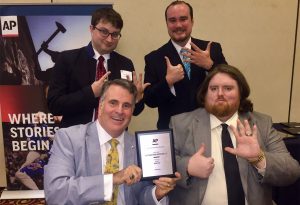 “Not only am I proud of our current interns, but also our former APR interns who just won professional AP awards,” said Pat Duggins, APR news director. “Tyra Jackson of the Opelika-Auburn News won for Best Business Story, and David Kumbroch of WHNT-TV won for Best Documentary.”

WVUA 23 competes in the small market television category against commercial televisions of similar size across the state of the Alabama.

“All of the awards we won were for our local coverage of Tuscaloosa,” said Amy Martin, programming creative services director, WVUA 23. “We’re proud of our hyperlocal coverage in Tuscaloosa that covers West Alabama in a unique way, not seen on other stations.”

The latest AP Awards celebrate a marquee year for Alabama Public Radio where their investigative coverage of the Alabama prison system won four regional Edward R. Murrow Awards, and their documentary, “Legacy of the Storm” won numerous awards at multiple levels of competition.

The four members of the Alabama Public Radio team spent four months re-interviewing the people they profiled immediately during the storm’s aftermath to see how life had changed for them over the course of the past five years.

The documentary won a bronze award in the Historical Documentary category of the New York Festivals’ World’s Best Radio Programs, which judges radio programming and promotions in all lengths and formats from radio stations, networks and independent producers from around the globe.

“Legacy of the Storm” also took first place in the Society of Professional Journalists’ Green Eyeshade awards, an annual contest which judges print, television, radio and online content for journalists across the Southeast.

“Both of these awards are noteworthy because both contests lump network entries together with entries from both large and small markets,” said Duggins.

“Alabama Public Radio beat an entry from Atlanta for the Green Eyeshade Awards, and competed against entries from Australia, Austria, Ireland and Hong Kong as well as entries from the United States for the New York Festivals.”

WVUA took home first place in the Best TV Sports Feature category for their piece, “Too Many Trophies: Hidden Gems of the Bryant Museum,” where Jack Royer explored the back rooms and hidden elements of the Paul W. Bryant Museum that aren’t on display.

Though the piece won first place in a professional category, it was produced entirely by UA students Royer, Reagan Wells and Brooke Lowery as a collaboration between WVUA and the Center for Public Television.

“When I submitted our pieces for these awards, I put what I thought was the best in each category,” said Martin. “I really didn’t look at the student pieces any differently or think about categories, because it was good enough to compete in the professional category.”