As a flagship institution, The University of Alabama is well-represented in major professional and academic organizations across a variety of industries. The College of Communication and Information Sciences’ relationship with the Association for Education in Journalism and Mass Communication (AEJMC) is an excellent example.

AEJMC is the largest, umbrella organization for educators in the fields of journalism and mass communication. Founded in 1912, the organization has grown to over 3,700 educators, students and practitioners from around the world. UA’s leadership and representation within AEJMC enables its faculty and students to be a part of the conversation that frames the evolving industries of journalism and mass communication at the educational level.

In addition to having an influential representation throughout the membership of AEJMC, UA’s Dr. Jennifer Greer was sworn in as President of AEJMC, and UA faculty took a large role in the leadership of the annual conference. Nearly twenty faculty members hosted presentations, participated in panels and moderated discussions at over 40 AEJMC conference sessions.

As part of the annual conference in August, each division of AEJMC had a business meeting where updates are provided, officers are given a chance to speak and awards were distributed. The following awards and accolades are some recognizing UA professors and their work in their respective fields.

The AEJMC division, Mass Communication in Society awarded their Promising Professor Award for faculty to C&IS professor, Dr. Brett Sherrick. Given annually, the award acknowledges excellence and innovation in teaching for three faculty members in the first five years of their full-time teaching career.

“I’m honored to be considered for the Promising Professor Award,” said Sherrick. “As a professor, you get a lot of feedback from students, but you don’t get as much from teaching professionals. This is a nice way to validate my work.”

Part of the evaluation process for the award involves examining qualities and teaching styles of the considered professors. This includes an examination of the professor’s strengths and weaknesses as well as what makes their teaching styles unique.

“Transparency is very important to me. I want my students to understand the reasoning behind the decisions I make,” said Sherrick. “This also helps me understand and justify those decisions myself, which is an important step in trying to improve my teaching.”

Dr. Sherrick’s research covers a broad topic range including the video game industry and its effects, media psychology and pro-social media or media with a received benefit to the consumer.

“We teach students to create media, so the question I always ask students is, ‘What do you want media to do?’” said Sherrick. “As a consumer, they have the opportunity to “vote” through the media they consume.”

Dr. Jennifer Hoewe Given Article of the Year Award

Another division of AEJMC, Communicating Science, Health, Environment and Risk, awarded C&IS professor, Dr. Jennifer Hoewe their Article of the Year Award for an article she co-authored along with Dr. Lee Ahern and Dr. Colleen Connolly-Ahern of Penn State University.

“The deficit model of scientific communication [teaches] that if people just have more knowledge, they will better understand,” said Hoewe. “What we are finding is that it is just not that simple. It’s not just getting the public the information. Their predispositions, their preexisting attitudes and beliefs are going to factor into how they use that knowledge.”

The research team’s study showed that even with scientifically accurate information about the effects of storm water runoff, people’s willingness to support solutions that would be helpful to combat those effects was influenced by their politics.

Unlike many other division-specific awards, there is no submission process for Article of the Year. Instead, an initial cut to the top 6 articles considered is performed by ComSHER officers and then a team of 5-7 experts of the field score the articles for quality and likelihood of impact on the field.

“I am really proud of the paper,” said Hoewe. “I think we put forth some really interesting ideas, and it was a unique way to test what we were looking at. It is an honor just to be considered.”

Also from C&IS, Dr. George Daniels was awarded first place for the Best Practices in Service Learning in Journalism and Mass Communication Teaching 2017 competition, sponsored by the AEJMC Elected Standing Committee on Teaching.

His entry, titled “Transforming Mass Media Students into Problem Solvers: A Mass Communication Diversity Service Learning Course,” highlights a course which places graduate and undergraduate students in a variety of service roles designed to increase their awareness of and sensitivity to difference and diversity.

“The class is a challenging course to develop,” said Daniels. “There are so many moving parts, it involves students working in the community and you are constantly developing partnerships.”

Dr. Daniels and the second- and third-place finisher in this year’s competition gave presentations on their entries at the annual conference.

“It is a great honor to have been the selected as the top person in the country this year for teaching in service learning,” said Daniels, “When you’re recognized nationally for doing a good job in that area, it certainly means a lot.”

The C&IS student-produced magazine, Alpine Living, won third place in a national magazine competition for its website. This competition, sponsored by the Magazine Division of AEJMC recognizes the top student magazine—print and online—as well as individual stories within the magazines. 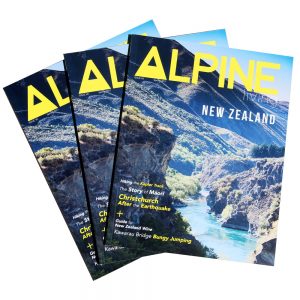 In March 2017, a group of graduate and undergraduate C&IS students traveled to New Zealand to produce a 100+ page, full-gloss, international travel magazine highlighting the culture, people and history of the country. For the seventh edition of this publication,  students traveled to Auckland, Christchurch and Queenstown, New Zealand and also had a brief stay in Sydney, Australia.

C&IS student, Matthew Wilson won 2nd place in one of the top article categories for his story, titled, “Sea of Dreams.” His story captures the perspective of Project Jonah and the Auckland Whale and Dolphin Safari in the preservation of marine life habitats in New Zealand’s Golden Bay and Hauraki Gulf.

In addition to the awards mentioned above, several C&IS faculty members were awarded top paper awards for their divisions.

Ethan Stokes received the McCombs and Shaw Top Student Paper Award in the Political Communication Interest Group for his work titled, “A Global Election: Analyses of Arabic, Chinese, and Russian News Coverage of the 2016 U. S. Presidential Election.”

The University of Alabama College of Communication and Information Sciences will host the 43rd annual AEJMC Southeast Colloquium on March 8-10, 2018. This is the longest running regional research gathering for AEJMC. 2018 will mark the fifth time that UA has hosted this event.

“There is a little more leniency in terms of the research papers not having been through as much review, and it is a great place to get initial feedback on projects you are working on,” said Daniels. “And it is grad student friendly, with the mix of grad students to faculty being about two-thirds graduate students.”

Additionally, the Southeast Colloquium provides attendants with an on-campus feel, rather than a hotel conference center in a major urban area. Participants will attend sessions in Reese Phifer Hall, tour University of Alabama facilities and experience Tuscaloosa attractions.

As a pre-conference, the colloquium will be preceded by the Ninth-Annual Discerning Diverse Voices Symposium. This day-long event welcomes participants from around campus and elsewhere in the nation for a unique venue for diversity-related research and creative activity.

For more information about the 43rd AEJMC Southeast Colloquium, visit the official site.