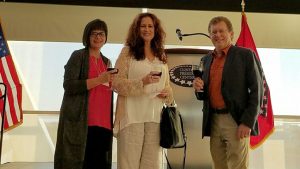 The American Journalism Historians Association (AJHA) has named University of Alabama Assistant Professor of Journalism and Creative Media Dr. Dianne Bragg as its 2017-2018 president. Bragg began her one-year term at the AJHA national convention, October 14, which was held in Little Rock, AR.

Bragg served three years on the AJHA’s Board of Directors before being nominated as the organization’s second vice president in 2015. She is the second UA professor to serve as AHJA president. Dr. David Sloan, who helped to found AJHA, was the first. Additionally, CIS faculty members Dr. Caryl Cooper, Dr. Ann Bourne, Dr. Meg Lamme, Dr. Karla Gower and Dr. Suzanne Horsley are members of AJHA.

“One of our primary focuses is making sure that journalism and media history remain a staple within colleges and universities throughout the country,” said Bragg. “Recent events are reinforcing the importance of historical insight.”

As goals for her presidential term, Bragg plans on continuing the agenda of AJHA’s emphasis on the importance of history in students’ civic education. She will also increase the visibility of the organization’s annual Southeast Symposium, a conference designed to promote graduate and undergraduate student research while providing a forum for student presentations and discussions.

“There is a strong emphasis within the social sciences and communication research for quantitative methods,” said Bragg. “When you think about journalism, it’s storytelling. We often offer an outlet for students who are pursuing a graduate degree but may want to do that narrative, qualitative kind of work.”

Bragg is one of eight current faculty members in the C&IS to occupy a position of executive leadership in leading national and international communication organizations.