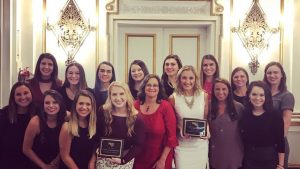 Given annually at the PRSSA National Conference, these awards celebrate outstanding campaigns and tactics utilized by PRSSA’s nationally affiliated, student-run firms across the country in the previous year. Capstone Agency won Best Tactic in 2015 and was named Best Student-Run Firm in 2016.

“The community within Reese Phifer is a huge part of the continued success of our firm and our public relations students, as a whole,” said Megan Perkins, Firm Director, Capstone Agency. “You are surrounded by people who care and are involved, which makes you strive to improve, as well.”

Capstone Agency’s submission for Best Campaign was their work completed for The Plank Center for Leadership in Public Relations, titled “Mentoring Matters.” The winning submission for Best Tactic came from the firm’s implementation flyers for their Less-Than-U-Think campaign, a campaign against binge drinking.

PRSSA has also named Capstone Agency as their Agency of Record. Under this arrangement, PRSSA becomes a client of Capstone Agency, who will conduct ongoing communication needs for the association for a two-year period.

Also recognized at the PRSSA National Conference, The University of Alabama’s PRSSA student chapter won a national award for university service for their work with the Campus Veterans Association and Beat Auburn Beat Hunger.

Capstone Agency is a nationally affiliated, student-run, integrated communications firm comprised of top communication students at The University of Alabama. They have been a student organization in the College of Communication and Information Sciences since 2010.