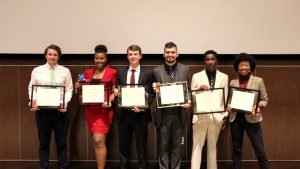 Christian Holt took home first place and The Oscar Newton Award of $200 for his informative speech comparing and contrasting the benefits and experiences of a four-year institution and a community college.

“Winning the Speak Off was an incredible honor,” said Holt. “Competing was a lot of fun. All of the speakers were truly fantastic, and deserve recognition in their own right.”

In third place, Matthew Weber’s speech presented an overview of maps, discussing the history of maps, types of maps and common issues and distortions that arise from two-dimensional maps representing a three-dimensional world.

The audience was polled and selected Rolanda Turner as its People’s Choice award recipient for her speech on the importance of sleep for the health and wellbeing of the human body.

All six Speak Off finalists are eligible to compete in the 2018 Holle Award for Excellence in Public Speaking contest on April 28, which awards a $10,000 cash prize to the winner.

A full list of the Speak Off finalists is as follows: