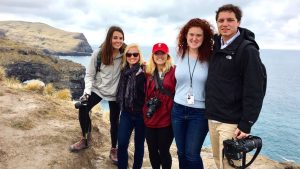 University of Alabama student-produced magazine, Alpine Living, has won two national honors from the Associated Collegiate Press Awards. Every year, the ACP presents individual awards, recognizing the best individual or group projects in collegiate journalism. The annual ACP awards are for achievements in newspaper, magazine and online journalism and considered to be the pre-eminent award for professional organizations.

In March, 2017 fifteen students from the Department of Journalism and Creative Media traveled to New Zealand to create and product a 100+ page, full-gloss magazine promoting the art, history, culture, people, and traditions of New Zealand. This is the seventh edition of Alpine Living magazine, a biannual, semester-long production course.

In the category of Feature Story of the Year, Elayne Smith and Madison Sullivan were awarded honorable mention out of more than 150 submissions for their story titled, “The Story of the Māori.” This story highlights New Zealand’s indigenous population, the Māori, and how they use an ancient tattoo art, Tā Moko, to tell stories and honor their ancestors.

For their work titled, “Resilient,” Christopher Edmunds, Cara Walker, Taylor Armer and Thomas Joa were awarded fourth place out of more than 125 submissions in the category Multimedia Feature Story of the Year. “Resilient” tells the story of how Christchurch, New Zealand recovered and redeveloped following a devastating 6.3-magnitude earthquake in February, 2011.

“I could not be prouder of this entire group of students for the amount of time, work, effort and heart they put into this entire issue,” said Dr. Kim Bissell, professor and faculty advisor to Alpine Living. “To travel to a different country and go non-stop for two weeks and then return and produce an entire magazine and website in three weeks is incredible. This group produced an amazing issue, and I am thrilled to see them getting recognized for their hard work.”

Other accolades for Alpine Living include a third-place finish for its website in a national magazine competition, sponsored by the Magazine Division of the Association for Education in Journalism and Mass Communication. Also, for his story titled, “Sea of Dreams,” Matthew Wilson won 2nd place in one of the feature article categories from AEJMC. His story captures the perspective of Project Jonah and the Auckland Whale and Dolphin Safari in the preservation of marine life habitats in New Zealand’s Golden Bay and Hauraki Gulf.

Alpine Living is an award-winning, student-produced, international travel magazine based in The University of Alabama’s department of journalism and creative media. Alpine Living aims to provide a service to the international travel community through in-depth feature writing, professional photography and packaged digital content. Students who are a part of the editorial team include graduate and undergraduate students in Journalism and Creative Media and go through a competitive and selective process in order to participate.