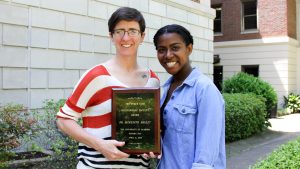 The Other Club selected Dr. Meredith Bagley (associate professor, communication studies) as the 2018 recipient of the Outstanding Faculty award as a part of their Honors Day celebration on the Mound. The award aims to recognize an outstanding faculty member who has made a significant impact in their respective area of campus, especially those whose work goes often unrecognized.

According to the Churchill Project at Hillsdale College, Sir Winston Churchill and his close friend F. E. Smith founded The Other Club after being refused membership at one of the most renowned gentlemen’s dining clubs in London, known as The Club.   Apparently, Churchill and Smith were too brash and controversial. Legend or not, The Other Club was founded in 1911 as a dinner-debate society, and still meets today in London on alternating Thursday evenings.

UA’s branch of The Other Club was founded at The University of Alabama in 1992 by Dr. Russell Bryant to cultivate an intellectual and unimpeded environment where students, faculty, administrators and community members can openly debate current issues. In order to be considered for membership, a candidate must attend the nomination dinner and be unanimously selected. Each year on Honors Day the Other Club presents two awards, on the Mound.

“Anytime you are nominated by a student for some sort of recognition it’s a thrill; it tells me that our teaching and engagement is making a difference where it matters most: with our students,” said Dr. Bagley. “The value of the Other Club is in line with the work we’ve done together on campus history, race relations, and effectively confronting myths and misconceptions about those topics. I’m honored and excited to be part of the Other Club!”