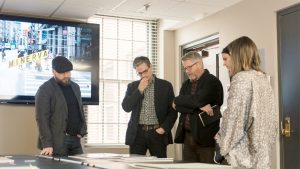 Minerva is the creative portfolio specialization in the Department of Advertising and Public Relations. The two-year program places selected students into a cohort through a rigorous application process and guides them through an intense process of creative discovery.

“It’s been a very successful year with Minerva students winning more local, regional, national and international awards for their creative advertising campaigns in 2018 than any other previous year by more than double,” said Mark Barry, Director, creative portfolio specialization. “We will be working hard to build upon this momentum moving forward.”

Two student teams brought home Awards of Merit from the Young Ones Student Awards put on by The One Club for Creativity in New York. The Young Ones competition is considered one of the premier competitions for creative students internationally. The student submissions responded to a creative brief charging the students to partner with FCB Health on an awareness campaign for the ongoing opioid epidemic.

Click on the following links to view the winning student campaigns:

Follow the Signs
Beyond Boundaries: Help is on the Way

The complete list of the 2017-2018 Minerva student awards is as follows: