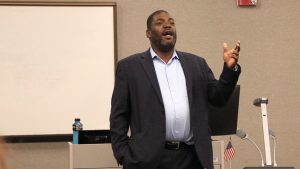 On October 18, the Alabama Program in Sports Communication hosted a scholar spotlight, featuring the University of Mississippi’s Dr. Charles Ross and a presentation on his research titled, “Protests in Pro Football, the 1965 AFL Boycott & Colin Kaepernick.”

In his presentation, Ross discussed the history of race and NFL boycotts, including the 1965 AFL boycott when a group of African American players led by Cookie Gilchrist refused to play in the AFL All-Star Game. According to Ross, the boycott resulted in a desegregating of the French Quarter in New Orleans. Ross connected the 1965 protest to the 2016 protest of NFL quarterback, Colin Kaepernick.

Ross signed copies of his book and answered questions from a full house of students in all C&IS majors. He encouraged them to use their platforms to make a difference in the world around them.

“Young people have the ability to change the world,” said Ross. “We still deal with racism, but the question is how do we navigate this? Colin Kaepernick decided to take a knee. You may choose to do something different.”

Ross is the Director of African American Studies and an Associate Professor of History at the University of Misssissippi. His research centers on race, sports and equity. He has authored two books — Outside the Lines: African Americans and the Integration of the National Football League, andMavericks, Money and Men: The AFL, Black Players and the Evolution of Modern Football.