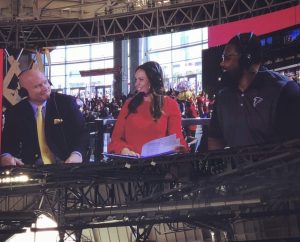 Prior to joining the Falcons, Whitley was the sports anchor for Fox 5 in San Diego. A graduate of C&IS, the journalist has reported for ESPN, Fox Sports, NBC Northwest and Fox 5 San Diego covering the NFL, MLB and NCAA Football, as well as supercross racing and Formula Drift. She has served as a sideline reporter and producer for the 2010 Vancouver Olympics, covered the Atlanta Braves on Fox Sports South and SEC athletics for CSN South, worked for Speed TV and joined the broadcast team for ESPN’s X Games in 2013.

An Alabama native, Whitley is a 2005 Telecommunication and Film graduate. If you are headed to see the Falcons this year, you just may see a friendly, C&IS face.