At only four feet, two inches tall, she weighs in at nearly 250 pounds of solid bronze. She stands daily in the Financial District of Manhattan, New York, staring down the Charging Bull of Wall Street. And for one hour on Friday, Nov. 2, the Fearless Girl did something even braver.

In a partnership between Change the Ref and Fight Gunfire with Fire, Manuel Oliver, the father of Parkland school shooting victim, Joaquin “Guac” Oliver, placed a bulletproof vest on Fearless Girl and dubbed her “Fearful Girl.” Change the Ref tweeted out, “She can’t be fearless if she’s afraid to go to school.”

You have probably seen her pictures by now, but what you may not have known is that behind Fearful Girl are two University of Alabama students, Emeline Earman and MK Holladay. Together with Mingyu Jo (ArtCenter College of Design, Pasadena), the trio thought up the idea during their summer internship at MullenLowe Group.

“Like most ideas, this started out as something different. Initially the idea was to put a bulletproof vest on the Statue of Liberty,” said Earman. “Our executive creative director mentioned it to a creative director in the Boston office who had the idea to put it on Fearless Girl.”

Earman, Holladay and Jo knew the idea had potential, but were not certain it would go anywhere. The concept was tabled until about a month and a half ago, when they were called and invited to New York to see the project carried through.

“The concept works because it clearly communicates the intended message,” said Mark Barry, Director of Minerva, the creative advertising specialization at UA. “But more importantly, what makes it great is that it communicates that message in an unexpected way. It allows room for the audience to do a little work on their own to really ‘get it.’” 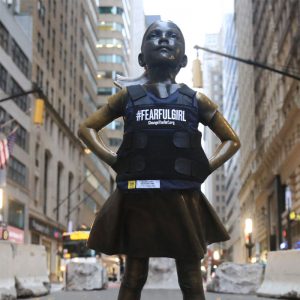 According to Barry, the creative advertising industry is constantly doing work on the cultural fringes of brand communications, using advertising as a powerful vehicle for cultural change. Within a few hours #FearfulGirl was trending on social media and the story was covered by media outlets such as ADWeek and affiliates of Fox News, CBS and NBC across the country.

Barry is proud of the student duo, whom he describes as “A well-rounded and dynamic creative team.” Their message rings loud and clear throughout the world.

“I think we all hope we can enact change, but at the end of the day, ideas like this are only cool if they do,” said Holladay. “Manuel’s shirt said, ‘Sorry for the inconvenience, we are trying to change the world.’ That’s certainly a sentiment we share.”

Change the Ref was formed to empower future leaders, using urban art and nonviolent creative confrontation to expose the disastrous effects of the mass shooting pandemic. Find out more at their website, here.

Fight Gunfire With Fire is a creative force stewarded by industry and thought leaders banding together. They take big, thought-provoking creative ideas and make them real to create a million of solutions that will end gun violence. Find out more at their website, here.

Minerva is the creative advertising specialization at The University of Alabama’s College of Communication and Information Sciences. Find out more on their website, here.