Life as a Freelance Film Professional in New York City 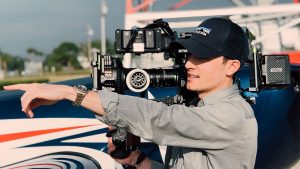 To Ted Snow, no work day looks the same. As a freelance director of photography in New York City, Snow has worked for Vogue, ESPN, Budweiser, the Oscars, Ralph Lauren and Tommy Hilfiger. He recently directed his first feature film, titled A Gift of Wings: The Pilots of Sebring, which profiles the human side of Aerobatic pilots. The film is now being shown in film festivals across the nation and was recently a semi-finalist in the Los Angeles CineFest and an official selection in the Metro Film & TV Awards. Snow loves the creativity and freedom that his work provides and says that when he is under pressure, he creates his best work.

“That’s what the freelance life is all about – nothing is ever guaranteed,” said Snow, “It is a constant grind. I love living in those moments of ‘what’s next?’.”

Snow is no stranger to the grind. As a telecommunications and film major in C&IS, Snow also worked as a student football equipment manager from 2008 to 2012. There, he worked from noon to 7 p.m. every day and met media outlets and camera crews who connected him to internships and a post graduate job. Ever since, Snow has taken to his grit and creativity to broadcast and film, working alongside some of the most influential brands.

“Never get complacent. Always stay hungry,” said Snow, “Nothing is ever guaranteed.”

To see more of Snow’s work, visit his Vimeo account or IMDb profile.