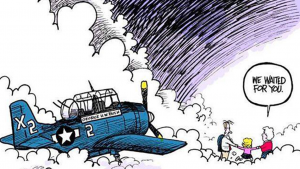 The content below is a reposting of The Washington Post story on Marshall Ramsey by Michael Cavna. You can view that story here. Marshall Ramsey is a current JCM graduate student through the Bama by Distance program.

Marshall Ramsey was awakened by his wife late Friday night with the news: President George H.W. Bush had just died. Right away, Ramsey thought back to his idea.

When former first lady Barbara Bush died in April, Ramsey — the editorial cartoonist for the Mississippi Clarion Ledger — created a memorial illustration that went viral. Days later, when her husband of 73 years became ill, Ramsey began thinking about a companion cartoon to salute the former president.

“But he’s tough as nails and bounced back,” Ramsey tells The Washington Post’s Comic Riffs, “so I just filed the idea away.”

Until Friday night, when Ramsey learned the 41st president had died at age 94, according to Bush spokesman Jim McGrath.

“I drew it as quickly as I could and then posted” it on social media, Ramsey says of the tribute. “It seems like I’ve [drawn] so many obituary cartoons this year — 2018 has been cruel. But since the last one was so well-received by the Bush family and by parents who had lost children, I wanted to make sure this one was right.”

This one was indeed right, based on swift public embrace of the work, which readers called “beautiful” and “touching.” The tribute cartoon in April pictured Barbara Bush in heaven, being reunited with her daughter Pauline Robinson “Robin” Bush, who died of leukemia in 1953. The Bush parents had called Robin’s death, at age 3, their greatest sorrow.

In the new cartoon, George H.W. Bush, the former Navy pilot and World War II hero, has flown a TBM Avenger to the pearly gates to be reunited with wife and daughter.

“I consider this cartoon and the Barbara Bush cartoon to be bookends,” says Ramsey, who was humbled by the praise that the cartoon drew — especially that of Jenna Bush Hager, the Bushes’ granddaughter.

“This brought me such comfort this morning,” Hager wrote Saturday on Facebook, with a shared image of the cartoon. “I had the opportunity to talk with my grandpa about the afterlife.

“This is what he said: ​He answered without any hesitation. ‘Yes, I think about it. I used to be afraid. I used to be scared of dying. I used to worry about death. But now in some ways I look forward to it.’ And I started crying. I managed to choke out, ‘Well, why? What do you look forward to?’ And he said, ‘Well, when I die, I’m going to be reunited with these people that I’ve lost.’ ”

When Hager asked her grandfather whom he hoped to see when reunited, she wrote that he replied: “I hope I see Robin, and I hope I see Barbara.”

The former president added, she wrote, that he hoped that upon this reunion, Robin would still be age 3 — “the little girl he held tightly: who spoke the phrase I have heard Gampy repeat for my entire life, forever knitting Robin’s voice into the tightly woven fabric of our family. ‘I love you more than tongue can tell.’ ”

Hager’s Facebook update has been shared more than 40,000 times and has received more than 100,000 responses.

“To read what Jenna wrote — let’s just say I’m honored beyond words,” Ramsey told The Post. “Let’s put politics aside for a moment — the Bush family is remarkably kind and gracious.”

When Ramsey was creating the Barbara Bush cartoon in April, he recalls thinking: “Here’s a person who has had just about everything go right in her life: mother and wife of presidents, big successful family, a successful platform of her own. But I thought: You know, she lost a child. And I know from friends who have lost kids that it is about as painful as it gets.”

Ramsey said about his cartoon honoring George H.W. Bush: “I wanted to incorporate his service to our country because, love or hate him, he served our country in about every capacity.” Ramsey noted he had recently flown in an Avenger, so the experience informed the artwork.

Ramsey notes, too, that it has been exactly 30 years since he first saw George H.W. Bush in person — and drew a caricature of him. The cartoonist was a student at the University of Tennessee at Knoxville in 1988 when then-Vice President Bush — while campaigning for the presidency — visited the campus. The cartoon Ramsey drew featured a lineup of presidential candidates angling for party nominations — including a Bush caricature that Ramsey, a two-time Pulitzer Prize finalist, says “did get better over time.”

Three decades later, Ramsey appreciates the responses from such figures as Hager and McGrath.

“But I also just got an email from a mother who shared her conversation with her dying 5-year-old about them reuniting in heaven,” Ramsey says. “Honestly, that moved me to tears.”