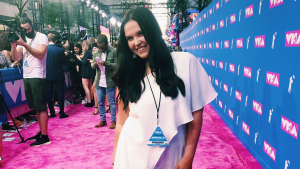 To view this full interview with Viacom and Doyle’s interviews with celebrities, click here.

As an intern for Paramount Network, Alana Doyle had to the opportunity to contribute to various television shows and partnerships within the Viacom network. She worked to create press kits, pitches and write stories about television shows. Her internship ended with the biggest stage of all: MTV’s VMAs. Doyle was selected out of the class of summer interns to work the pink carpet and interview celebrities as a ViaCommunity reporter, Viacom’s social responsibility initiative.

ViaCommunity and Viacom’s Campus to Career teams invited current summer interns to submit a video proving how they would thrive on the pink carpet as a Viacommunity reporter, injecting the company’s social conscience into one of its most-followed programs.

Doyle was a given a one-week notice to compile her submission which was a take on the typical talk show format which she titled, The Daily Dose.

“Comedy Central’s The Daily Show is one of Viacom’s partners so I decided to play both roles: the interviewer and the guest,” said Doyle. “What better way to show that I could interview someone than to just interview myself?”

Her video tackled important social and economic issues while still remaining true to Doyle’s personality and passion for entertainment. Three days after submitting her application video, Doyle received an email that she said “changed the rest of her life.” Despite having no prior experience in acting or television, Doyle was the only intern chosen to interview celebrities at the VMAs.

“In all honesty, I still am pinching myself to this day just thinking about it,” said Doyle. “There was no way that I, a 21-year girl from Arizona, was about to not only attend the VMAs, but also be able to speak with celebrities at the VMAs.”

Doyle was flown up to New York City the day before the VMAs and was immediately connected with Viacommunity representatives who helped her prepare for her role on the red carpet. Because of her passion for mentoring younger generations, Doyle prepared questions that asked celebrities about their role in social issues and about how they are giving back to their communities.

“Once I hit the pink carpet, wiping a smile off my face was impossible,” said Doyle, “I really put everything I had into this experience so that I could walk away knowing that I did the best I could.”

Since then, Doyle has returned to C&IS with a new vision for her career in public relations and is extremely grateful for the leaders she met during her internship and time with the VMAs. She plans to graduate as a public relations major in May 2019.

To view this full interview with Viacom and Doyle’s interviews with celebrities, click here.