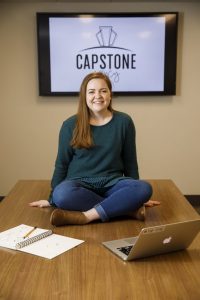 The alliterative effect found in their names isn’t their only commonality.

Bailey, who interned at JJPR in the summer of 2017, and Jenkins, a University of Alabama alumna, also seem to share a mutual admiration.

“Brooke was definitely one of our shining stars when it comes to interns,” Jenkins says. “She was very well-versed. Her writing skills were wonderful. That is one of the hardest things to find when we are taking on interns and training them. We don’t always have a lot of time to teach those skills.”

“One of the things we look for first and foremost is initiative,” Jenkins says. “She had a lot of experience coordinating events, and she was great on the phone. She didn’t hesitate to pick up the phone and make calls to vendors or media contacts.”

Jenkins leads an award-winning agency; Bailey, though still a student, oversees 40 student art directors and copywriters in her role as assistant creative director with UA’s Capstone Agency, a student-run communication firm. She was named recipient of the Susan Colvin Prize, awarded annually to the College of Communication and Information Sciences’ most outstanding student.

Jenkins, a Fayette, Alabama native, also knows a thing or two about looking up to role models. She says it was her own hometown hero, Jackie Waldon, a PR professional at the local hospital, who first showed her the potential a path in public relations offered when she was a teenager.

“Jennifer is one of the most amazing women I have had the opportunity to know,” Bailey says of her mentor. She describes Jenkins’ work ethic as inspirational and says she successfully balances her professional drive alongside commitments to family and community.

Bailey is a recipient of the Susan Colvin Prize, awarded annually to the College of Communication and Information Sciences’ most outstanding student.

“She’s on top of her game as a parent, and at the agency and in her community,” Bailey says. “That showed me that you can be in the industry and work really hard and also have a home life and be influential in your community and give back.”

During her internship, the UA student helped develop social media content calendars for the firm, wrote blogs for its clients and weighed in on PR issues during the firm’s weekly staff meetings.

“We had so much fun that summer,” says Bailey, a 2015 Daphne High School graduate. “I don’t think there was any point that summer where I felt like just an intern.”

President of the UA College of Communication and Information Sciences Ambassadors, Bailey is scheduled to graduate in May. With minors in studio art and computing technology and applications, Bailey says she wants to focus on the visual side of public relations. She is applying for fellowships and positions with some of the larger public relations agencies in Washington D.C., Chicago and New York.

“I think Brooke is going to be one of those people who makes the University really proud,” Jenkins says. “We will see her in big places doing great things upon graduation.”

Bailey says it’s the variety of opportunities, both big and small, that she relishes most about her chosen profession.

“I think I most enjoy the flexibility of public relations and the nature of how it changes from day to day. You never know what you are going to be doing.”

And, you never know who you will encounter along your path who might prove pertinent to your profession.

The University of Alabama, the state’s oldest and largest public institution of higher education, is a student-centered research university that draws the best and brightest to an academic community committed to providing a premier undergraduate and graduate education. UA is dedicated to achieving excellence in scholarship, collaboration and intellectual engagement; providing public outreach and service to the state of Alabama and the nation; and nurturing a campus environment that fosters collegiality, respect and inclusivity.