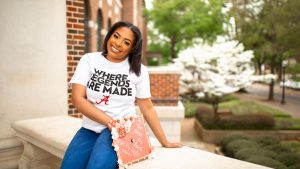 When Jenai Richards was 10 months old, her mother noticed that she was behind on some developmental milestones typical for babies her age, and the trend continued for years. At three years old, Richards was diagnosed with Asperger’s Syndrome.¹ The specialist informed her mother that Richards would never have a normal primary or secondary education, that she would struggle socially and would forever be dependent.

Defying the odds, Jenai Richards will walk across the stage in Coleman Coliseum next Saturday a proud graduate of the College of Communication and Information Sciences (C&IS) at The University of Alabama.

But her path to graduation was not easy. Without the care and devotion of her mother and father constantly motivating her, refusing to allow her to settle, Richards story might have ended as predicted.

“My mother saw something in me, and nobody was ever going to tell her that her child wasn’t going to amount to anything—she wasn’t going for that,” said Richards. “She was like, ‘Alright, bet.’”

Richards worked relentlessly and overcame tremendous obstacles. As a child, she underwent years of speech occupational therapy four times a week with an in-home therapist. There she learned how to do every-day physical tasks such as holding a pencil and more complicated, expressive things like articulating her personal wants and needs. 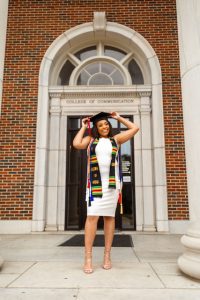 In contrast to the traits which generally accompany autism, Richards has no issue talking with others and being social. Instead, her struggles are focusing, articulating her emotions, using her hands and adjusting to new routines. Astonishingly, her degree is in communication studies, a program which teaches students to think critically, express and advocate ideas effectively, and to understand and appreciate the diversity of human communication practices. In many ways, her college experience is everything that could have spelled disaster.

But she didn’t just make it through college; she thrived. Richards took an active role with the University’s division of student life. She served as a peer leader for First Year Experience, a member of the CAMP 1831 A-Team and volunteered her time and energy with both UA Dance Marathon and the Center for Service and Leadership when she wasn’t in class.

Richards also worked for three years in the Ferguson Center as an administrative office assistant, where she had to focus, use social skills and operate with a comprehensive knowledge of the University. According to Richards’ mother, for someone on the autism spectrum to learn the layout of the University well enough to direct others in an articulate manner and represent the University in a professional way, is an exceptional feat in and of itself.

After graduation, Richards will relocate to Nashville, where she has already secured employment with Dell as an account manager. She will begin with the June 2019 Sales Academy Class, a thirteen-week training program, and will have access to a mentor to guide in her professional development. This is proof that all her motivation and hard work has paid off.

“Every year of my college experience [my mom] had such high expectations for me, because she didn’t want me to be overcome by self-doubt,” said Richards. “There were low points for me, but ultimately she instilled a flame in me and she’s never let me blow it out.”

When she walks at graduation next Saturday, Richards defiantly accomplishes so much of what many people told her, her father and her mother she never could.

“Everything that was in my way as a challenge, I either found an alternate route or I hurdled it,” said Richards. “You’re told that there’s this list of things you need to be successful, and I didn’t have any of the things typically on that list, and yet here we are.”

The flame is burning brighter than ever.

The College of Communication and Information Sciences (C&IS) at The University of Alabama develops global leaders who do the extraordinary across the full communication and information spectrum. To learn more about C&IS, visit cis.ua.edu/

¹According to austimspeaks.org, Asperger syndrome is a diagnosis on the autism spectrum which generally involves difficulty with social interactions, restricted interests, desire for sameness and distinctive strengths. It is distinguished from other forms of autism by the presence of typical to strong verbal language skills and intellectual ability. In 2013, Asperger syndrome became part of the umbrella diagnosis of autism spectrum disorder (ASD) in the Diagnostic and Statistical Manual of Mental Disorders 5 (DSM-5).