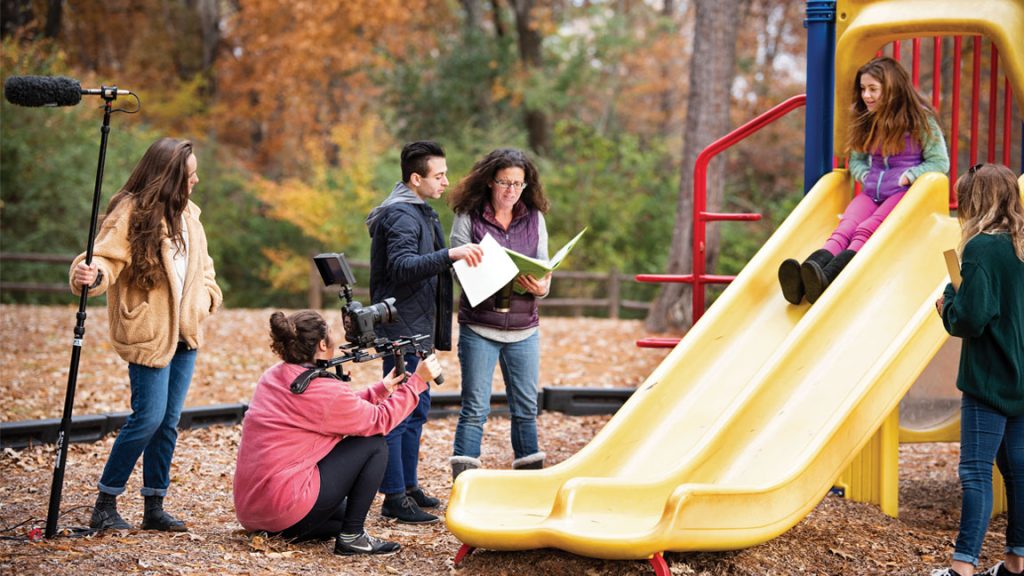 How a Student-Produced Film is Changing Public Perception

Juvenile idiopathic arthritis is a debilitating disease affecting thousands of children across the country. Telecommunication and film student, Joshua Cohen, is using his film, “M I A” to raise awareness about JIA and cast a light on this invisible disease.

Filmmaking has an incredible ability to change the sentiments surrounding a topic. The picture, lighting and audio affect the senses, bringing audiences to a place they have not been and compelling them to consider perspectives and experiences that, to them, are foreign and unexplored. Senior telecommunication and film major from Atlanta, Georgia, Joshua Cohen, understands the power of film to move people and sway public thought. He wants to use his film, “M I A,” to change the world.

“M I A” tells the story of a young girl named Mia, who is navigating life with a painful and debilitating disease: juvenile idiopathic arthritis (JIA). As the film describes, juvenile arthritis is an umbrella term for a number of childhood diseases affecting the joints and musculoskeletal system. JIA specifically includes symptoms such as muscle and soft tissue tightening, bone erosion, joint misalignment and changes in growth patterns. To make matters worse, children suffering from JIA are often overlooked or marginalized. That’s why Cohen titled his film, “M I A,” as in “missing in action,” a play on the character’s name and her social standing.

As a story, “M I A” is deeply personal to Cohen. More than one member of his family has been diagnosed with diseases in the arthritis family. Although in retrospect Cohen’s mom has been battling a disease similar to Mia for most of her life, the disease became challenging and life altering about 15 years ago, forcing her to undergo numerous, regular chemotherapy treatments and surgeries. Cohen witnessed the disease attack his mother’s body first-hand, which served as personal motivation to tell Mia’s story and use it as a vehicle for awareness and change.

“I really wanted to get the story out there because there’s not enough awareness about this disease,” said Cohen. “When I asked my film crew what they thought arthritis was, they thought it was when people had difficulty texting with their thumbs and having stiff joints. That’s understandable, but it can also be life threatening and life altering.”

In the film, Mia’s physical limitations isolate her from her peers and force her to miss out on many of the activities other children can easily enjoy. Mia’s story captures her good and bad days, her frustration with routine doctor visits and injections, the emotional toll shared by her family and, ultimately, her motivation to move beyond her diagnosis and present herself in her own way.

“The film shows what it’s like to live with this disease from Mia’s point of view,” said Cohen. “It shows what Mia can and can’t do. At the beginning, she lets this disease limit her, but by the end of the film, it doesn’t define her anymore.”

Because the disease is rare and hard to diagnose, increased awareness amplifies the importance of funding and research to treat and improve the quality of life for those who suffer from JIA. It would also help those who suffer to better understand their symptoms and seek appropriate help from a physician. These are just a few of the ways Cohen wants “M I A” to make a lasting impact.

For students enrolled in JCM 437: Scene Directing, the script is the starting point. Students come to the class with a script ready to workshop and revise. The editing process exposes weaknesses while strengthening attributes in the plot, dialogue and character profiles. 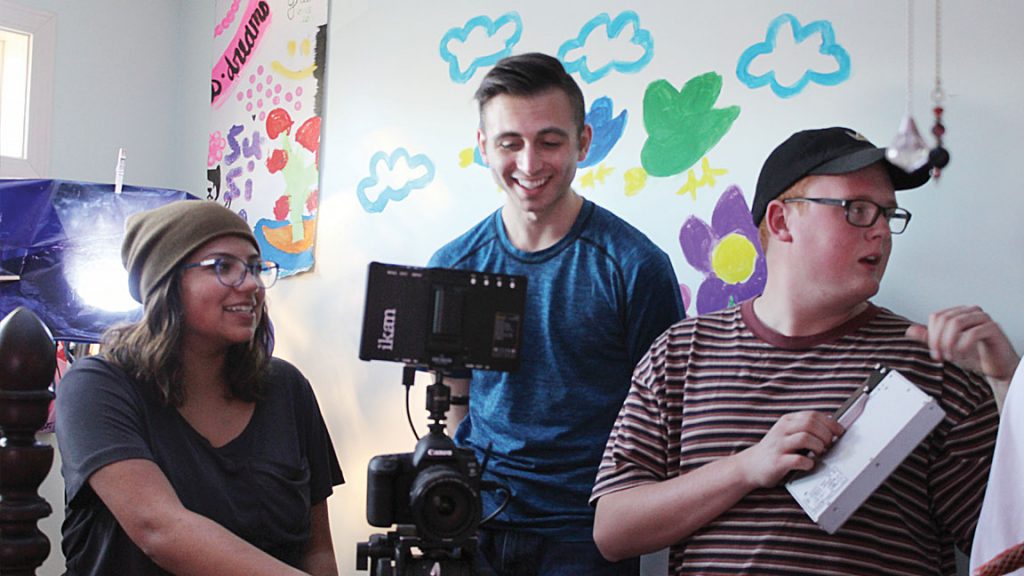 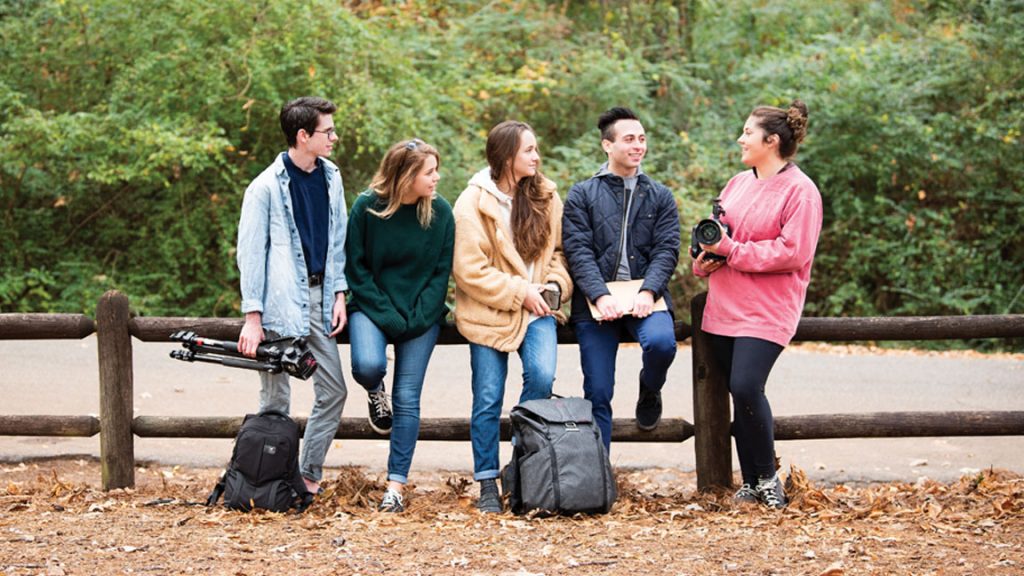 “I knew Joshua had a really good story to tell,” said Maya Champion, Cohen’s instructor for JCM 437. “In this class, these films are usually the first films students produce, and they’re meant to be stepping stones for a career.”

For the writer, director and production team, JCM 437 provides students an opportunity to create stories in a variety of different roles as part of a film crew. When Cohen selected his crew, he found his director of photography in C&IS senior Rhianna Israni of Lakeville, Minn. While Cohen directed the actors and drew out their emotions in the scenes, Israni was lining up the shot, mapping out camera movements and adjusting the lighting.

“Every film you work on improves your skills,” said Israni. “You learn a lot from getting new experiences. This was the first time I ever shot under water. It was a lot more difficult than I thought it would be, but it turned out really cool.”

Before filming even one scene, the team ensured that they meticulously mapped out every second of filming down to the last minute. With every shot scheduled back to back, moving from location to location, the crew remarkably wrapped up filming for the entire project in just two days. To pull this off, the entire team had to know exactly where to be and what to do in every step of the production.

“With script writing and everything else, the process lasts a whole semester,” said Cohen. “So, it’s rare to get everything done in two days and not have any pick-up shots.”

The student team was modeled after a professional production crew in the film industry. As director, Cohen tasked his peers with responsibilities in various categories: lighting, production design and sound, to name a few. Cohen and Israni worked tirelessly together, shoulder to shoulder, to produce one final video.

“We watched through all the shots and talked. It was a collaboration,” said Israni. “He’d like some shots because of the acting, and I would make a case sometimes for a different shot because the camera had a smoother angle.”

As Cohen’s instructor, Champion is proud of the way the film artistically tells Mia’s story. But for Cohen, the project was much more, and his aspirations fly high beyond his final grade. In the end, he wants to have changed public perception.

Using a Film to Raise Awareness

Twelve-year-old Lily Champion is like many kids her age. Her favorite animal is a shark, and she can’t decide if she wants to be an actress, a marine biologist, a journalist or some variation of all three. Diagnosed with JIA at a young age, in many ways, Mia’s story is Lily’s story—sitting on the bench while her friends at school play during recess, feeling marginalized and ignored. She has lived the experiences Cohen’s film captures, and her struggles equipped her to play it out on screen.

“When we first told Lily about the story, she wanted to be in it,” said Cohen. “Then when we showed her the script, she read through it and said, ‘Wow. I did all these things. I had these symptoms.’”

Films showcasing actors and actresses with disabilities are rare; rarer still are films whose actors and actresses portray their own disability on the screen. Casting Lily to play Mia and telling her story alongside the film gives JIA a young, relatable face, personalizing the experience in such a way that audiences feel Mia’s struggles and are motivated to be agents of awareness and change themselves.

The awareness efforts for JIA are limited when compared to other, more widespread diseases. Cohen is using “M I A” to rewrite the script on this disease. In a tangible sense, this dream of Cohen’s is already a reality. His film already screened at Camp M.A.S.H. (Make Arthritis Stop Hurting), a camp run by Children’s Hospital of Alabama. Now, Cohen wants to extend his reach even further by permitting physicians to screen the film in their offices and submitting the film to various film festivals across the country.

“Once you put it on the festival circuit, you can attract attention from people who want to develop it into a feature script,” said Champion. “Then Josh can use his student film as a stepping stone to something bigger.”

Bringing “M I A” to a larger audience would mean pivotal conversations are taking place about the perception of and treatment for JIA. “M I A” gives a voice to young people all over the country who exist in a daily struggle with a seemingly invisible disease. More than that, “M I A” gives them confidence that their disease does not have to define and rule over their circumstances.

From the first day of JCM 437, Cohen’s dream has been to use his gifts as a director and filmmaker to make a difference in the lives of children like Mia. With the passion Cohen brings from his personal experiences and the hard work of the student film crew, “M I A” has unlimited potential to change the conversation, and for film students like Cohen, these educational experiences are invaluable.