Capstone Agency: How UA’s Student-Run Firm Became the Best in the Country 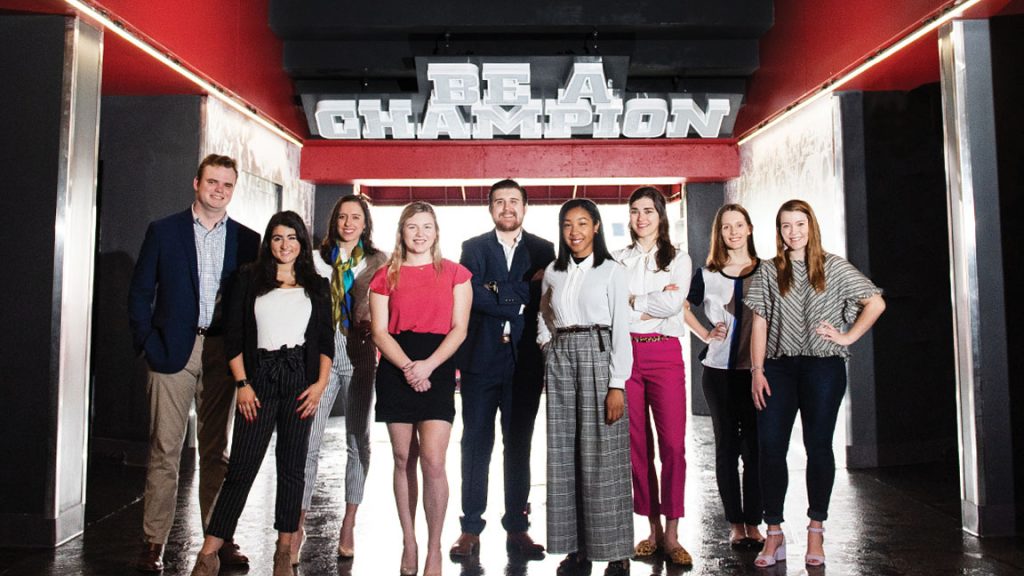 In 2008, Teri Henley was handed a thin, manila folder of old client leads and inherited a team of twelve undergraduate students. She was tasked with reinventing Alabama’s student-run communications firm in a way that would provide students a platform to build their portfolios, interact with clients, deliver sustainable campaigns and gain insight into the communication industry. In just ten years, that firm, Capstone Agency, has grown to 115 members representing all five C&IS undergraduate majors and has twice been named the best student-run firm in the nation.

If you look around Teri Henley’s office, her commitment to excellence is displayed clearly by the number of plaques, medals and awards that decorate the walls. She describes herself as “award driven,” and it shows in how she uses awards to motivate her students. After all, at The University of Alabama, people like to win.

“The first national PRSSA conference I attended, I sat there through the awards banquet and Alabama didn’t get anything,” Henley said. “Like Scarlet O’Hara, I swore—as God is my witness—we would never go home empty handed again.”

And she was right; the agency wouldn’t go home empty handed for long. In 2011, competing against professionals on a national level, they won the Public Relations Society of America’s (PRSA) Silver Anvil Award of Excellence for LessThanUThink, an anti-binge drinking campaign. A National Chapter Award for University Service would follow in 2012. Then, in both 2016 and 2018, PRSSA named Capstone Agency the Best Student-Run Firm in the country, an award which evaluates firms based on their agency operations, billable hours, client work, client revenue, professional development opportunities for members, agency culture and pro bono work. In the past three years, Capstone Agency has also been awarded PRSSA’s Best Campaign (2x), Best Tactic (2x), and served as PRSSA National’s Agency of Record. National recognition at this scale and with this consistency makes Capstone Agency a model for other student-run firms to emulate, study and implement at their schools. In a matter of only six years, the agency went from empty-handed to best firm.

Without a doubt, Henley has been instrumental in the sustained success of Capstone Agency, but she would place herself far outside the spotlight; she says her job is to “sit back and watch the magic happen.” According to Henley, the “secret sauce” of Capstone Agency has two main ingredients. First, agency members are constantly thinking about the next person to fill their shoes and are not “allowed” to graduate until they’ve replicated themselves. The second ingredient is that Capstone Agency is truly led by students. The agency selects its own membership and leadership, produces its own client work and its members hold each other accountable. The students take ownership and set high goals. 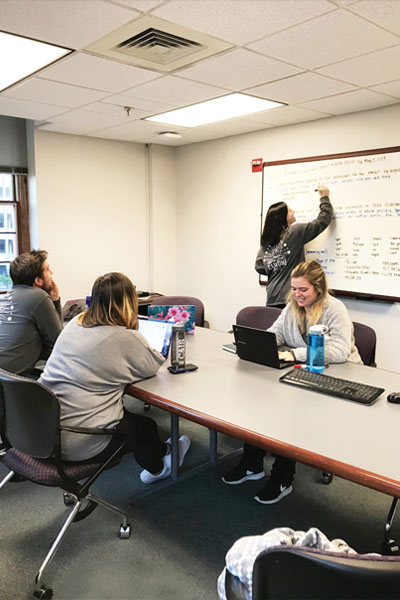 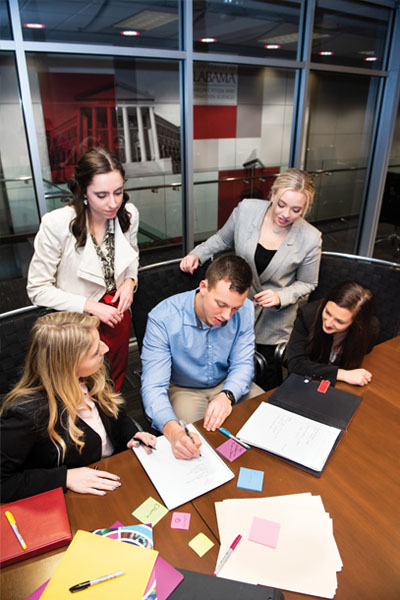 Capstone Agency students preview client work for one of the agency’s 10 clients. 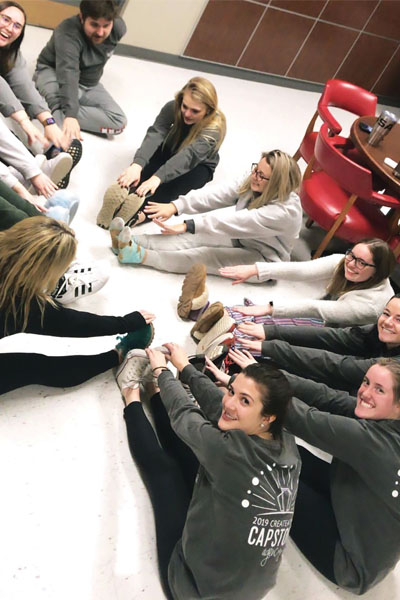 Capstone Agency students take a break to stretch it out during Createathon.

“They totally run themselves,” said Henley. “They mentor each other and look out for each other, because they don’t want the agency falling apart after they graduate; they want it to keep growing and keep getting better.”

The results speak for themselves. Last year alone, Capstone Agency completed work for eight clients across disciplines, securing local and national media coverage, managing more than $65,000 in client budgets and logging more than 12,700 hours of work.

“The students in Capstone Agency are preparing themselves for their careers after graduation,” said Dr. Joseph Phelps, Chair of the Department of Advertising and Public Relations. “We’re talking about professional-caliber work and an experience that can’t be duplicated elsewhere.”

“Capstone Agency offers me an unmatched experience working with real clients in a functional agency environment. Contributing alongside driven, passionate students from different backgrounds challenges me to learn about all areas of the public relations field, and seeing campaigns from ideation to final evaluation enables me to build a breadth and depth of transferable skills,” said Kathleen McManus, assistant firm director from Chicago.

At PRSSA’s National Conference, it’s now common to see other universities’ public relations students approaching Capstone Agency team members, asking what their secret is and how they continue to produce results. Ten years ago, Henley saw untapped potential in what a firm at The University of Alabama could be and, in that, an opportunity to become something truly special. It’s hard to imagine that only a decade ago, Capstone Agency was an unaffiliated group of about a dozen students who occasionally gathered to do pro-bono work for organizations on campus.

“I basically told them I wasn’t interested in doing that,” Henley said. “I asked them, ‘What do you think of doing this instead? Because if you want to do something bigger, something strategic, you can be a whole lot more.’”

Henley may not be immortalized in bronze alongside names such as Stallings, Saban and Bryant, but her commitment to excellence, her vision for something more and her empowerment of student voices have a pluck and grit all of their own, ensuring that she will be ever remembered as one of Alabama’s legendary leaders. And if she has her way, the student awards will keep on coming.