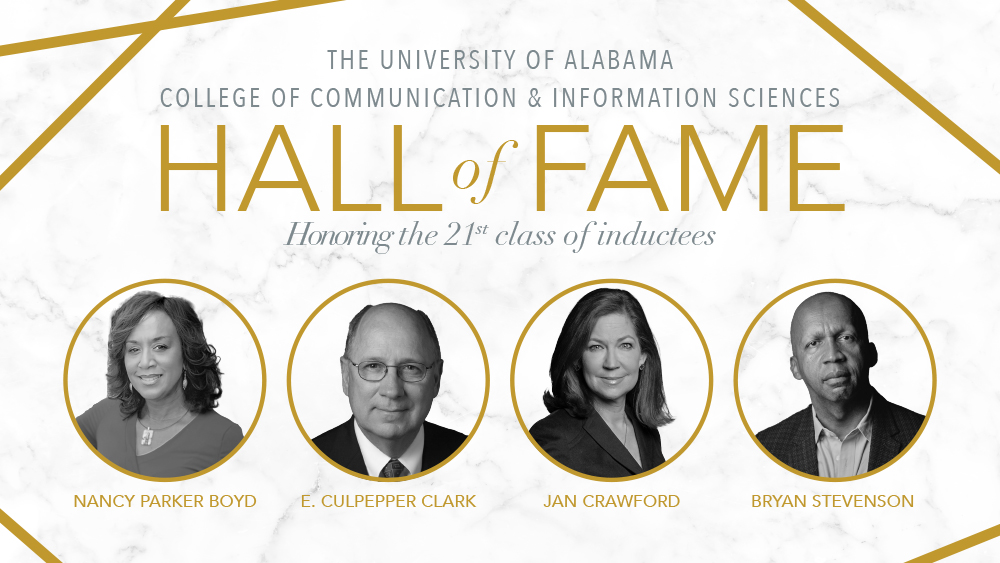 C&IS hosted its biennial Hall of Fame ceremony on Friday, Feb. 19. The virtual ceremony honored Nancy Parker Boyd, E. Culpepper Clark, Jan Crawford and Bryan Stevenson. C&IS Board of Visitors member Barry Copeland, president of The Copeland Strategies Group, served as emcee. The video produced by the Center for Public Television to honor each of our inductees can be viewed here. Additional information about each inductee is available below.

Nancy Parker Boyd graduated from the College of Communication and Information Sciences with a Bachelor of Arts degree in Journalism in 1988 before beginning her television broadcast career with TV stations in Georgia and Alabama. After anchoring the news for several years at WAFB in Baton Rouge, she made New Orleans her home where she covered New Orleans and South Louisiana for three decades. A five-time Emmy Award-winning journalist who served as a morning anchor for WVUE FOX 8 in New Orleans, Boyd was a legend in the community and an inspiration to young aspiring journalists. Boyd passed away in a plane crash while reporting a story on August 16, 2019.

Jan Crawford is the chief legal correspondent for CBS News and a recognized authority on the U.S. Supreme Court. Her 2007 book, “Supreme Conflict: The Inside Story of the Struggle for the Control of the United States Supreme Court” gained critical acclaim and became an instant New York Times Bestseller. Crawford is a 1987 graduate of The University of Alabama and a 1993 graduate of the University of Chicago Law School. She has taught journalism at American University and frequently speaks about the Court to universities, law schools, legal organizations and civic groups across the country.

Bryan Stevenson is the founder and Executive Director of the Equal Justice Initiative (EJI), a human rights organization in Montgomery, Alabama. Stevenson is a widely acclaimed public interest lawyer who has dedicated his career to helping the poor, incarcerated and condemned. He is a graduate of Harvard Law School and Harvard’s School of Government and the author of the award-winning New York Times bestseller “Just Mercy,” which was recently adapted as a major motion picture.