A Passion for Giving Back: Scottie Rodgers 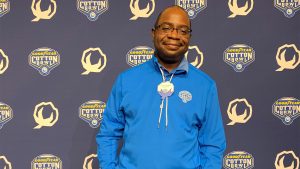 While a college diploma symbolizes years of hard work, it doesn’t always tell the full story of a person’s journey.  Behind the scenes there are usually years of preparation, extracurricular involvement, and making the most of every opportunity. Scottie Rodgers (Journalism 95’) came to The University of Alabama with a passion for writing and a strong desire to hone his skills as a communicator. Although he didn’t know it at the time, it was the experiences he would participate in as a student that would help him create his story and later shape him into a mentor for both students and alumni of the University.

Before attending college, Rodgers worked for his hometown paper, The Atmore Advance, and gained experience as a sportswriter. He also attended the University’s minority journalism workshop – now known as the Multicultural Journalism Workshop – where he won the award for best story, and his experience prompted him to declare journalism as his major at the College of Communication and Information Sciences (C&IS).

As a student, Rodgers worked in UA Athletics for three years. He worked numerous sporting events and spent countless hours working in the athletics department through this position and was able to work closely with the women’s soccer program for the team’s first season reinstated as a varsity sport at the University.

“If it wasn’t for C&IS giving me the opportunity to grow as a person and grow into myself as a professional, then I wouldn’t be able to be where I am right now,” Rodgers said. “These were such meaningful experiences and exposed us to so much more about what the world working in sports looks like and what the world in sports was going to be.”

Rodgers believes it is important to take advantage of every opportunity. To show his gratitude for the experience C&IS provided him, he now aims to provide the same opportunities and insight to current students.

“I think if I can help someone understand what opportunity sits there in front of them and they can take advantage of it, then it’s going to open up a new world to them while they’re in school and when they step off campus as a graduate,” Rodgers said.

His main advice to both C&IS students and alumni – listen and be willing to grow and surround yourself with great people to guide you along the way.

“When you get to that new city, find the Alabama alumni. There are Alabama alumni everywhere, and it’s a great avenue to connect with people who may have similar interests,” Rodgers said. “Get involved and get engaged because you’ll be surprised who you’ll find.”

Rodgers now serves as director of communications for the Cotton Bowl Athletic Association which runs the Goodyear Cotton Bowl Classic. He began his role in August 2020 and was a part of the 85th Cotton Bowl Classic in December 2020. Due to the pandemic, his organization also had the opportunity to host the 2021 College Football Playoff Semifinal at the 107th Rose Bowl Game and made history by hosting only the second Rose Bowl Game ever to be played outside of Pasadena.

Rodgers said that the most rewarding part of his job is celebrating the student-athletes who make it to the postseason each year.

“It’s been a vehicle to help get the stories about the student-athletes, their programs and their universities out there. We’re not directly connected to the student-athletes like someone would be who is on campus, but when they do come to our game it is a celebratory time for them,” Rodgers said.

Rodgers’ experience in sports and journalism, his gratitude for the people and opportunities that led him to his career, and his passion for helping students has encouraged him to give back to C&IS. He hopes to provide students with the knowledge and resources that will set them up for success within their future careers.

“You have to pay it forward, and I wouldn’t be here if somebody didn’t do something for me. I feel like at this stage in my career I want to make a point to focus on giving back to those who gave to me in the places that gave to me,” Rodgers said.