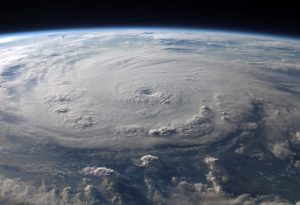 A new study by a team of professors from the College of Communication and Information Sciences (C&IS) will examine the effectiveness of public risk messaging to help residents along the Gulf Coast stay safe during hurricanes and other extreme weather events.

They will analyze social media discussions and conduct interviews and surveys to understand the information channels, tools and resources that coastal emergency managers, community leaders and residents use for short-term and long-term decision-making when preparing and going through severe weather.

“We’re not weather experts, but we’re communication experts,” Armstrong said. “What we can bring to this project, and what’s appealing to the Sea Grant folks, is that we can understand communication and distribution of these messages and how to measure that, how to understand it and how to then give recommendations for how these experts get their messages out.”

Understanding how the public receives and acts upon severe weather alerts and warnings can help emergency managers craft the most effective messages to save lives. The team will focus on the three southern-most emergency management areas of Mississippi and the two southern-most areas in Alabama.

The study will take place during three phases over the course of two years. The first phase will consist of analyzing conversation patterns on social media. By searching keywords, hashtags and specific date ranges on those platforms, the team can evaluate how people seek and relay information and concerns before, during and after extreme weather events.

“Before these tools were available, you’d have to rely on survey data and retrospective-type stuff that would be harder to get a full and perhaps accurate picture of how things played out,” said VanDyke. “This is an exciting new application for the theory, but to also get a more valid snapshot of what public discussion looks like in these areas.”

The second phase has an engagement plan where the team will interview decision-makers, such as emergency managers and city officials, to understand when they decide to start preparing before a storm arrives, what tools they use in making those decisions and how they process risk factors to their areas.

“Decision-makers may or may not have the technical background and understanding to be able to decipher the meaning of uncertainty,” VanDyke said. “What scientists mean by uncertainty might be different than how we in the general public interpret uncertainty, so being able to marry both public and decision-maker needs is really important.”

Focus groups will also be conducted with community members and public opinion leaders to see how they evaluate official messages and how they’re going to make choices during these storms.

“Comprehension and terminology are the big issues,” said Armstrong. “I can see the need for training and awareness of what watches, warnings and these types of terms mean, or maybe coming up with some more uniform terms to talk about coastal issues.”

The third phase will use large-scale sample surveys to determine the differences in information processing and tools, with a specific focus on comparing underserved, urban and rural populations.

“People who live in urban areas have this belief that it’s not going to happen to them or not going to be that big of a deal,” Armstrong said. “Then there’s the people in rural areas that live in flood plains. Every time a huge storm comes in, they’re getting flooded, and it may be that they’re more prepared than others because it happens so frequently.”

Armstrong said taking all this information and coming up with a mitigation plan, especially in underserved areas, is one of the key goals of this study.

“We’re talking about people with limited resources who don’t have ways to evacuate,” she said. “Hurricane Katrina proved sometimes you just can’t leave. What kind of plans can we make for these people who can’t or won’t evacuate? I’m always concerned about that.”

The team will be providing their findings after each phase so decision-makers can continuously analyze and update their plans as the project progresses. A summary of the entire study will be made available to the academic and practitioner communities at the end of the two-year period.

“Here at Alabama, there’s a big push to get more resources built, more information pooled, more accurate forecasts, and it’s just marrying that with where people actually are,” said VanDyke. “In a lot of cases, it’s not an information problem as much as it is an infrastructure problem, or as much as it is values or personal experience or whatever that barrier is that prevents people from using that information.”

UA’s College of Communication and Information Sciences faculty and students conduct cutting-edge research that creates knowledge and provides solutions to global issues across the full communication and information spectrum. To learn more about the College’s research initiatives, visit cis.ua.edu/research.