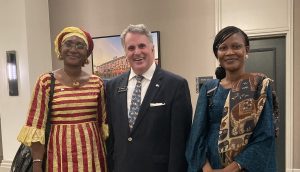 Pat Duggins, news director at Alabama Public Radio (APR), was recently invited by the U.S. State Department to address a delegation from Africa regarding APR’s 14-month investigation of human trafficking. The audience included representatives of victim support groups, law enforcement and courts from nations including the Democratic Republic of the Congo, Djibouti and Burkina Faso, among others.

The meeting was held in Birmingham, Alabama, as part of the State Department’s International Visitor Leadership Program. Through the program, leaders of foreign countries, and “up and coming” leaders, are invited to the United States to meet with Americans with similar interests and experiences. The program is considered the U.S. State Department’s premiere avenue for the exchange of ideas between leaders in the U.S. and those from foreign nations. Alumni of the program have gone on to become world leaders, including Margaret Thatcher, Tony Blair, Anwar Sadat, Indira Gandhi and Nobel Prize winner Oscar Arias. The State Department felt APR’s 14-month investigation offered an opportunity to further U.S. foreign policy, and thus they invited Duggins to speak about the project.

“I was honored to spread the good word on APR’s project and the role an APR student intern played in it,” Duggins said. “During my address, I made it a point to say that, even though my team and I had spent 14 months investigating human trafficking, I was not claiming to be an ‘expert.’ I felt that message was necessary considering the background of the delegates. I wanted to hear what they had to say, even though I was the speaker.”

The initial investigation was completed in 2019 after APR spent 14 months and three thousand miles on the road investigating the trafficking issue in Alabama. Duggins was motivated to begin the investigation after reading a report from The University of Alabama’s College of Social Work on the child sex trade in the state. The report found 1,100 known cases of trafficking in Alabama in 2017, the year before the investigation began. The findings from APR’s investigation were compiled into a multi-episode award-winning radio series and a documentary which delved deeper into the specifics of human trafficking and those impacted by it.

The work completed during the investigation included contributions from APR student interns from the College of Communication and Information Sciences (C&IS). C&IS Alumna Tina Turner was named a top ten finalist in the audio category of the Hearst Journalism Awards Program for two audio reports she completed during her student internship with APR, including an episode of the human trafficking series titled, “Selling Kids: Being LGBTQ in the Bible Belt.” Duggins included insights from Turner’s work in his address.

As Duggins reflects on the address, he is humbled by the impact of both the project and the address in bringing light to the issue of human trafficking. 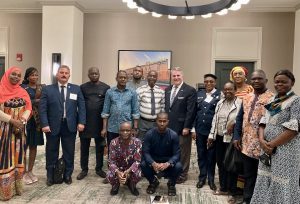 “The most poignant response to APR’s trafficking investigation is that two more victims of the sex trade have contacted me. They heard our coverage online and were offering to tell their stories,” Duggins said.

At the address, the State Department focused heavily on the impact of journalists within APR and their commitment to investigating human trafficking and eradicating the global problem.

“I was gratified that they focused on my role as a journalist, and my profession’s responsibility to shine a light on trafficking,” Duggins said.

To learn more about the project or APR’s role in the State Department address, click here.

Alabama Public Radio is a network of public radio stations based in Tuscaloosa, Alabama that serves the western half of the state of Alabama with classical, folk, jazz and nostalgic music programs, as well as local news and news and feature programs from National Public Radio, Public Radio International, and American Public Media networks. To learn more, visit apr.org.