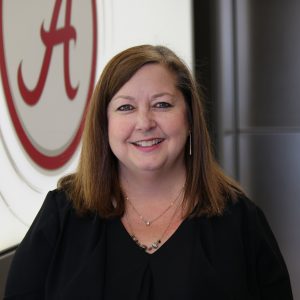 Dr. Chandra Clark, assistant professor in journalism and creative media, recently received the Outstanding Commitment to Teaching Award from The University of Alabama National Alumni Association. The award is given each year to four faculty members at the University who demonstrate an outstanding commitment to teaching.

Clark teaches several broadcast journalism courses within the College of Communication and Information Sciences, including courses in electronic news, producing and digital news. Prior to joining the faculty at UA, she was an assistant professor at the University of Montevallo and a visiting professor at Samford University.

Clark’s passion for broadcast journalism started when she volunteered at a television station at 16 years old, and it continued as she helped start two other television stations in West and Central Alabama. During her career she has served as a senior producer at the ABC affiliate in Birmingham, a freelance producer, and a broadcast media marketing specialist for The University of Alabama.

Clark’s creative scholarship focuses on the impactful role of journalists in society. Her teaching focuses on leading the next generation of journalists by training them in ethics and in the profession of broadcast journalism in the ever-changing media landscape. She is innovative in teaching technology and storytelling across all mediums, platforms, and aspects of news, weather and sports. She has produced a series of award-winning mini documentaries related to how broadcast television and radio play a critical role as “first informers” in natural disasters, and she has produced a 5-part documentary series called “Eyes of the Storm.” Clark has also produced a forthcoming feature-length documentary on retired UA football coach Gene Stallings named “Do Right: The Stallings Standard.”

Clark believes in experiential learning, and she and her students have worked extensively with more than 60 nonprofit organizations and corporations to create over 100 comprehensive multimedia projects to date. Most recently, Clark and her students partnered with The World Games to produce and publish multimedia virtual tours for an international audience.

In 1976, The University of Alabama National Alumni Association began an innovative program designed to annually recognize four faculty members at the Capstone who demonstrate “Outstanding Commitment to Teaching.” The awards are based on the faculty members’ commitment to teaching and the impact they have had on students through the teaching and learning process.

The National Alumni Association is a self-governed, nonprofit membership organization that serves The University of Alabama and its many alumni, students, parents and friends. Through its programs, the Alumni Association promotes a spirit of fellowship among the alumni, provides a continuous flow of information on the progress and needs of the University, and encourages united alumni support for its advancement. For more information, click here.

This story was originally published by The University of Alabama National Alumni Association.