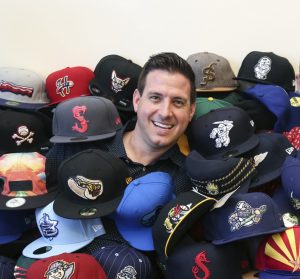 Minor league baseball teams across the country are being rebranded with new names and mascots thanks to the work of Brandiose, a branding and design agency based in San Diego, California. These teams and their refreshed brands are becoming an integral part of their city’s identity.

Brandiose was founded by C&IS alumnus Jason Klein and his childhood best friend, Casey White. The business partners and lifelong friends created Brandiose out of Klein’s residence hall, Burke Hall, at The University of Alabama. Years later, the branding and design agency is credited with developing the creative logos and mascots of minor league teams across the country including the Amarillo Sod Poodles, El Paso Chihuahuas, and Huntsville, Alabama’s Rocket City Trash Pandas.

Klein earned his bachelor’s degree in advertising from C&IS in 2003, but his interest in sports and branding started long before that. In high school, Klein served as his school mascot and later, the mascot for the San Diego Padres, following them to the 1998 World Series. When he decided to attend The University of Alabama, he successfully accomplished another goal – representing the University as Big Al.

When Klein started his business while attending UA, he met with a director of licensing and was able to see how the University interacted with a design firm. He then modeled his own business from what he learned. Klein believes the sports branding opportunities at the University are unmatched, and he attributes the start of his success to UA.

“In college I was surrounded by the pageantry, traditions and rituals at The University of Alabama, which I think was incredibly helpful,” Klein said.

Nearly 20 years after graduating from UA, Klein still looks to the University for motivation and advice. In particular, he regularly listens to press conferences of head football coach, Nick Saban.

Determination and perseverance were both important for Klein when beginning his career. He recognized early on that professional sports branding was a competitive market. When starting Brandiose, Klein and White sent letters to 150 minor league baseball clubs, and received a response from only one team in Jackson, Tennessee. After receiving the response, the business partners spent their entire summer working on a branding project for the team. That perseverance led to the lasting success of Brandiose.

Several of the agency’s current clients have gone viral and been featured on SportsCenter among other media outlets. After receiving promotional uniforms from Brandiose, some of their clients have earned hundreds of thousands, and even millions, of dollars in retail sales, earning a spot in the agency’s “Six-Figure Club.”

“I love when we get to see our clients at our annual convention and they talk about how much money the merchandise has made them,” Klein said. “I love being able to see them grow their business, and the more merchandise they sell, the more people in America that are wearing their logo, and that’s awesome.”

Klein and White are creating a lasting legacy in Minor League Baseball – one team at a time. Their creativity and talent in advertising is bringing fame to cities across the nation.

Learn more about the work of Brandiose here.