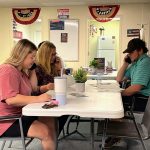 C&IS faculty aim to provide students with real-world opportunities to apply the knowledge and skills that they learn in the classroom. Dr. Jessy Ohl, associate professor in communication studies, teaches COM 341: American Political Rhetoric and saw this year’s midterm election as an opportunity to show his students the important role election officials play in making elections possible.

Throughout the semester, Ohl’s students learned about American political rhetoric, and particularly about the increased hostility and threats directed at election officials. Then, on November 8, the students traveled across Tuscaloosa to make an impact on the election process, volunteering in several capacities across the city.

“Conspiracy theories and misinformation have painted a grossly false representation of the people who make our elections possible,” Ohl said. “So, students were asked to directly participate in the democratic process by volunteering as poll workers and canvassers.”

Nicholas Braswell, a sophomore communication studies major and COM 341 student, volunteered as a poll worker on election day and felt that his experience was challenging, rewarding and eye-opening.

“Election Day on the front lines of working the polls was unlike anything I have ever experienced,” Braswell said. “It was a long, draining and repetitive process, but I am grateful for the encounter and have developed a profound respect for those that step up and do this mandatory job every single election year.”

Another COM 341 student and senior public relations major, Cat Gibbs, spent the election day canvassing a neighborhood in Tuscaloosa. She went door to door meeting residents within the neighborhood and talking to them about their knowledge of climate change. Through her experience, she developed a newfound admiration for Tuscaloosa residents and the role of canvassers in government elections.

“I don’t normally get the chance to talk to residents of Tuscaloosa since I spend most of my time on campus, so being able to listen to the residents was inspiring. I heard so many stories about how weather has impacted their lives, especially the 2011 tornadoes,” Gibbs said. “I was able to learn so much from the stories that residents shared with me, and I would love to canvass again and continue meeting Tuscaloosa residents.”

The work of these C&IS students was noticed and admired by Tuscaloosa County Probate Judge Rob Robertson, who thanked the students for their commitment to the election process.

“Elections are crucial for the democracy of our county, state and country, so It was encouraging to see more young people and students involved in the electoral process,” said Robertson. “This cycle we had classes study the election which resulted in more involvement at the high school and college level. It is imperative we continue to educate our youth on the importance of elections and those who fought and died for our right to vote.”

As the United States nears another political election season, C&IS faculty prepare their students to identify political dynamics that surround elections. Because of Ohl’s COM 341 course and his commitment to experiential learning, C&IS students had an opportunity to make a positive impact on the election process.