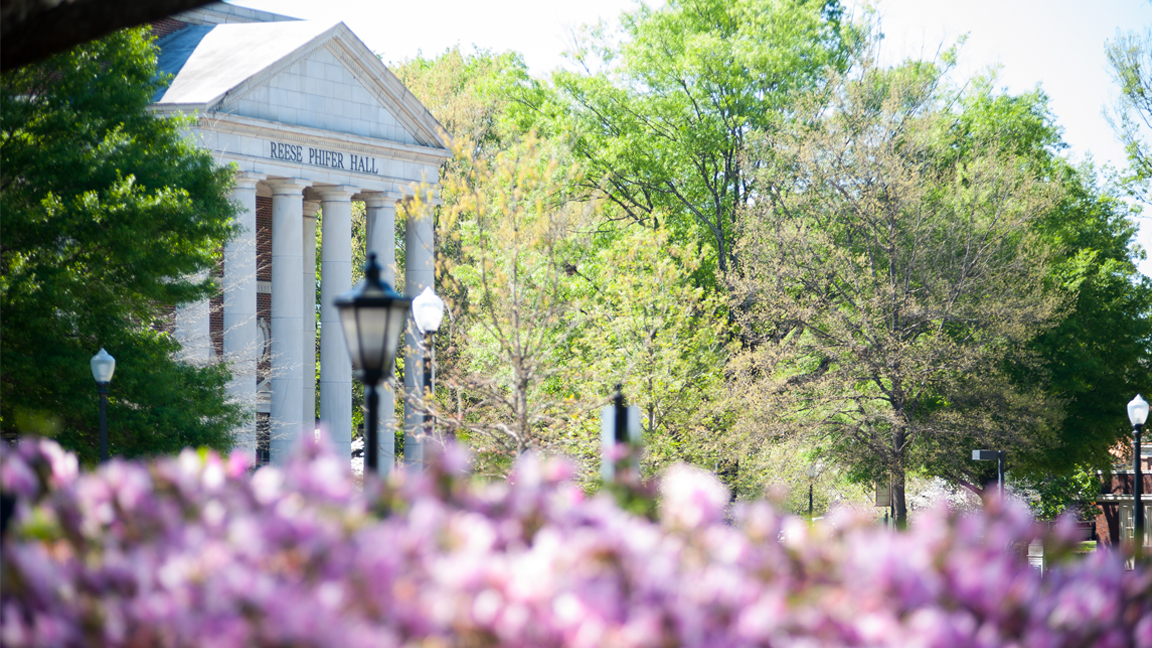 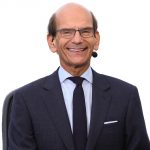 Paul Finebaum is a sports author, television and radio personality, and former columnist. His primary focus is sports, particularly those in the Southeast. After many years as a reporter, columnist and sports-talk radio host in the Birmingham area, Finebaum was hired by ESPN in 2013 for its new SEC Network and produced a radio show out of the network’s regional base in Charlotte, North Carolina. He is a regular on various ESPN shows such as Get Up, First Take, SportsCenter and College Gameday.

Finebaum has received more than 250 regional and national awards stemming from his days at the Birmingham Post-Herald, later writing for both the AL.com and Sports Illustrated. He has also written several books, including The New York Times best-seller, My Conference Can Beat Your Conference: Why the SEC Still Rules College Football.

Widely respected as an authoritative voice in his field, Finebaum is ranked on many national lists, including No. 25 on The Big Lead’s The 30 Most Powerful Talents in Sports Media Today (2017) and No. 35 on The 75 Most Powerful People in Sports Media (2019). Additionally, Jason Barrett of Barrett Sports Media polled 35 radio executives around the nation, and listed Finebaum No. 6 in America’s Top 20 National Sports Shows of 2017.

In October 2013, the University of Tennessee presented Finebaum with the “Accomplished Alumni Award,” which recognizes notable alumni for their success and distinction within their field. In 2008, he was honored by Columbia University School of Journalism for a program dedicated to Martin Luther King Jr. Day. In 2016, Finebaum delivered the keynote at the annual meeting of the Associated Press Sports Editors annual convention in Charlotte, North Carolina. 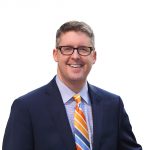 John F. Szabo is the City Librarian of the Los Angeles Public Library, which serves over four million people—the largest population of any public library in the United States. He oversees the Central Library, 72 branches and the library’s $194 million budget. In 2015, the library received the nation’s highest honor for library service, the National Medal for Museum and Library Service, for its success in meeting the needs of Angelenos and providing a level of social, educational and cultural services unmatched by any other public institution in the city.

Under his leadership, the library’s major initiatives include those related to immigrant integration and citizenship, improving financial literacy, and providing health resources and programs. He has expanded the library’s reach into the city’s diverse communities through partnerships with several community-based organizations.

He currently serves as Chair of the Board of Trustees of OCLC, Inc., a global library cooperative and on the Board of Directors for California Humanities. He also serves on an advisory board for the University of Southern California Center for Library Leadership and Management. He has previously served on the Executive Board of the Urban Libraries Council and as President of the Florida Library Association. 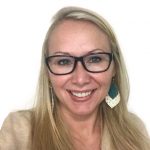 In her 12 years at MediaScience, she has led more than 500 projects for clients such as ESPN, Disney, Hulu, Viacom and Google. These findings are often presented at industry conferences held by the Advertising Research Foundation and American Academy of Advertising.

Rask earned her Ph.D. in Mass Communication and her master’s degree in advertising & public relations from The University of Alabama, and a bachelor’s degree in business administration in marketing at the University of Montevallo. Her research areas include advertising effectiveness, cognitive processes during multitasking, media effects and advergaming. Rask worked as a research fellow at the Interactive Television Research Institute at Murdoch University in Perth, Australia after graduation.

Rask lives in Georgetown, Texas with her husband, Jason, and two children, Ava and Jack. When she’s not in the lab, she enjoys spending time in the Texas outdoors. 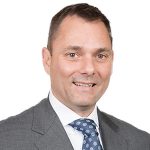 W. Lance Covan is the Founder of Bon Secour Capital Holdings, LLC., based in Mobile, Alabama. Covan currently serves as the CEO and Chairman of the Board of Mitternight Boiler Works, Inc., and Chairman of Al-Fla Plastics.

Covan moved to New York from Tuscaloosa, Alabama, where he was the Director of Athletic Development for UA’s Athletic Department. In his role there, Covan’s primary responsibility was to work towards securing $150 million in funding.

Covan currently serves on the board of directors for CSS/Ormed Health Technologies, Project Expedition, PathNorth Board of Advisors in Washington, D.C., The University of Alabama Entrepreneurship Institute Advisory Board, the Mobile Chamber of Commerce Board of Directors and Advisory Board, and the Reese’s Senior Bowl Committee. Covan is a member of Young President’s Organization and Covenant Presbyterian Church.

Covan has earned his bachelor’s and master’s degrees from The University of Alabama and completed post graduate studies at Sichuan Union University in Chengdu, China in 1997. He and his wife, Shellie Pryor Covan, are natives of Mobile, Alabama, where they reside along with their two children. 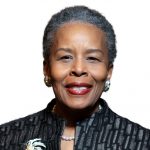 Angela Fisher Hall is the Regional Librarian for the Alabama Regional Library for the Blind and Physically Handicapped (BPH). As head of BPH, Hall provides leadership and support for planning, development and improvement of state-wide library services for citizens of Alabama who are blind, have visual impairments, or have a disability and cannot
read or hold print. She plans, coordinates and monitors the activities of BPH so that all specialized services are in compliance with state and national standards.

Hall has more than 37 years of experience working for public, academic and special libraries with 33 years as a professional librarian. She received her bachelor’s degree from Birmingham-Southern College and a Master of Library Science from The University of Alabama. In 2009, Hall completed sixteen years of service with the Birmingham Civil Rights Institute where she served as Vice President of Publications and Special Projects.Hall currently serves as President for the NLS Southern Region. Additionally, she is a member of the National Federation of the Blind of Alabama Senior’s Division. Hall has one son, Hardwick Olin Hall II, who works in Birmingham as a graphic designer. 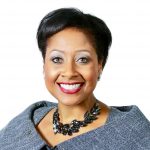 Kristina L. Hendrix, APR is the Director of Corporate Communications for Dynetics, Inc. in Huntsville, Alabama. She oversees all of the internal and external communications for the company as well as for the defense, cyber, space
and commercial sectors.

She is a member of Public Relations Council of Alabama (PRCA) where she has held many board positions including past president of both the local chapter in North Alabama and the state organization. Hendrix is also a past president of Southern Public Relations Federation (SPRF) and a member of the SPRF Council of Leaders. Her community board and volunteer work extends to the Alpha Kappa Alpha Sorority, Inc., The Community Foundation of Greater Huntsville, Junior League of Huntsville, Arts Huntsville and The Huntsville Botanical Garden.

Hendrix’s is the recipient of the 2015 PRCA Philip R. Forrest, Jr. Professional Achievement Award and the 2016 SPRF Professional Achievement Award, the highest honors given to an individual PR practitioner by both organizations. She is the youngest person to receive both honors to date. Hendrix holds a bachelor’s degree in public relations from The University of Alabama and a master’s degree in journalism with an emphasis in strategic communications from the University of Memphis. 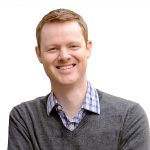 Joshua Spurlin is the Senior Content Editor for the PGA TOUR in St. Augustine, Florida, where he has worked since 2010. During that time, he has been the lead editor for network specials on ESPN, CBS and NBC, as well as approximately 150 episodes of Inside the PGA TOUR which aired on the Golf Channel. He also leads post-production for national ad spots for global brands like CDW Corporation, United, Mastercard and Morgan Stanley.

Prior to 2010, Spurlin worked in Los Angeles and Atlanta on documentary and lifestyle shows for CNN, Discovery, Food Network, HGTV and NBAtv. His work has earned a Peabody award, numerous Telly awards and two National Sports Emmy nominations. Since 2018, he has served The University of Alabama by conducting an advanced post-production workshop in the Journalism and Creative Media department. He, along with his wife and 3 year old son, reside in St. Augustine, Florida. 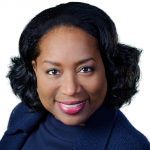 As former director and head of corporate communications at Brasfield & Gorrie, her impact in the industry led to an appointment with the Associated General Contractors of America’s Diversity & Inclusion Steering Committee. There, she helped introduce practices aimed at creating greater inclusion in the construction industry.

Nelson has been recognized by Black Enterprise, DiversityInc, Savoy and Urban Professional magazines. She is an inductee of the Nevada Women’s Chamber of Commerce Hall of Fame, where she holds its highest honor, the Athena Award for Leadership.