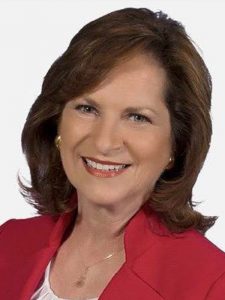 Janet Hall O’Neil is an award-winning former news anchor for WBRC FOX6. She served her community for more than 40 years anchoring daily newscasts and delivering the news throughout the Birmingham area. Hall, a native of Birmingham, Alabama, graduated from The University of Alabama in 1977 with a degree in broadcast and film. Over the years, viewers have relied on Hall to cover everything from The Blizzard of ’93 to the tornado outbreak of April 27, 2011 and the COVID-19 pandemic. She developed popular franchises including one-on-one interviews in the “Alabama Spotlight,” glimpses of Birmingham’s past in “Every Now and Then,” and profiles of ordinary folks “Doing Good.”

Hall has been recognized with numerous awards including the Associated Press Best Anchor in Alabama in 1994 and 2001, as well as awards for Best Feature Story, Best Documentary and Extraordinary Coverage of a Planned Event. Hall was also awarded the Outstanding Alumni Award and the Betsy Plank Distinguished Achievement Award from UA’s College of Communication and Information Sciences (C&IS). As a songwriter and guitarist, Hall has recorded two albums of original music and won recognition from the Alabama Tourism Department for her song “Alabama Breeze.”

Beyond her career, Hall is a committed public servant and is the current chair of the board of Urban Ministries serving the people of Birmingham’s West End. She is a member of the C&IS Board of Visitors and is a longtime supporter of the Hoover School System’s Finley Awards recognizing outstanding character. Over the years, Hall has served the community as a board member of AIDS Alabama, The American Red Cross and Goodwill Industries.

Hall resides in Birmingham with her husband, Frank O’Neil. They both built their news and business careers on degrees from The University of Alabama, and together they established the Endowed Faculty Position in Journalistic Integrity in C&IS. This new position is intended to focus on building successful business models that value, support and protect integrity in all forms of journalism.

They are the proud parents of two children, Allie and Jack.