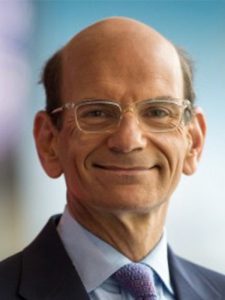 Paul Finebaum is a celebrated sports author, television and radio personality and former columnist best known as the host of “The Paul Finebaum Show” on the SEC Network. In addition to his four-hour daily program, he is a regular on various ESPN shows such as “Get Up,” “First Take,” “SportsCenter” and “College Gameday.”

Finebaum was born in Memphis, Tennessee and attended the University of Tennessee. He graduated in 1978 with a degree in political science. In 1980, he began his career as a newspaper journalist in Birmingham, Alabama, and later became an award-winning columnist and investigative reporter. In 2010, Finebaum landed a radio talk show on Sirius-XM radio before joining ESPN in 2013 to host “The Paul Finebaum Show.” Notably, Finebaum has interviewed Apple Chairman and CEO Tim Cook, Lockheed-Martin chairman and CEO Marilyn Hewson, author John Grisham and country star Darius Rucker.

Finebaum has received more than 250 regional and national awards stemming from his days at the Birmingham Post-Herald, followed by both AL.com and Sports Illustrated. He has also written several books, including The New York Times best-seller, “My Conference Can Beat Your Conference: Why the SEC Still Rules College Football.”

Widely respected as an authoritative voice in the field, Finebaum has received several accolades. In 2008, he was honored by Columbia University School of Journalism for a program dedicated to Martin Luther King Jr. Day. In October 2013, the University of Tennessee presented him with the Accomplished Alumni Award, which recognizes notable alumni for their success and distinction within their field. In 2016, Finebaum delivered the keynote at the annual meeting of the Associated Press Sports Editors annual convention in Charlotte, North Carolina. In January 2020, Finebaum was the recipient of the 2020 Mel Allen Media Award, given to media members who have made a lifetime contribution to sports through their work.