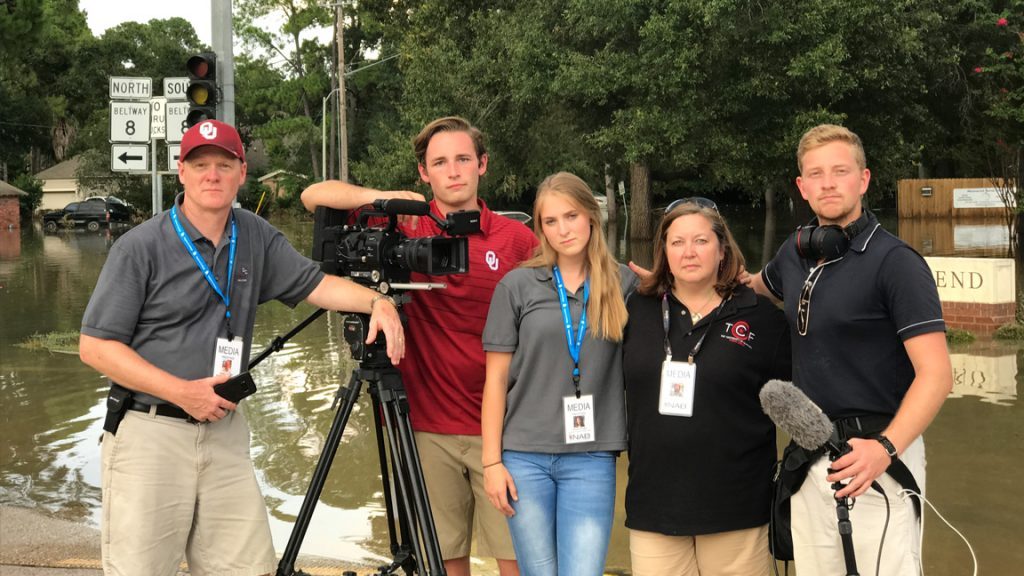 When Hurricane Harvey made landfall in Southeast Texas on Friday, August 25, C&IS professor, Dr. Chandra Clark received a call from the National Association of Broadcasters (NAB). She was asked to monitor the situation and consider going to Houston, Corpus Christi and Beaumont, Texas should the storm greatly impact these areas. Unfortunately, it did. The storm’s tempestuous winds and heavy rain destroyed much of what stood in its path, and Clark prepared to travel.

Clark spent the next week prepping—following reporters on social media, researching and mapping out stories and locations. Each day before the trip, she and her colleague, Scott Hodgson of the University of Oklahoma, would conference call with the NAB and Broadcast Education Association (BEA), planning out coverage and establishing contacts for stories. Their purpose was not to cover Hurricane Harvey so much as it was to cover those who covered Hurricane Harvey.

These stories also illustrate the role of communication from federal, state and city leaders to broadcasters, and how crucial radio and television are in the process of getting information to viewers and listeners in a real-time situation where lives are on the line. The team documented the 2011 EF4 tornado which affected Tuscaloosa, the 2012 hurricane known as “Superstorm Sandy,” and a 2013 EF5 tornado which struck Moore, Oklahoma.

“These videos go to the White House, they are shown in Congressional hearings and to the FCC,” said Clark. “When media organizations are looking for funding for broadcast initiatives, this work demonstrates the indispensable role that radio and television broadcasters play during natural disasters.”

September 3-9, Clark and her team conducted 48 interviews with full production setups at television and radio stations in Houston and Beaumont. They spoke with several families in Houston who lost their homes, but also captured a typically untold story: the personal damage the storm had upon the broadcasters.

“During the time of a natural disaster or breaking news, the audience doesn’t always realize the hazards happening behind the scenes for reporters, producers, and managers,” said Clark. “In a case like this, news personnel are living in the community they are serving, and some of them lost their homes just like their neighbors. So, they are going through the same situations as the people they are reporting on whether or not they talk about it on the air.”

Several broadcasters lost their homes while rescuing and helping their neighbors and friends. Many of them worked 3-4 days straight with little to no sleep, helping with rescues and giving out crucial information the public needed to make informed decisions.

Clark invites her students to help with the project at the outset and in the editing process, for which they receive valuable experience and their name in the credits. The process altogether takes 2-3 months because of the enormity of the content and the fact that the team works on the finished product as they collaborate between The University of Alabama and the University of Oklahoma with shared, duplicate drives.

The National Association of Broadcasters is the voice for the nation’s radio and television broadcasters. As the premier trade association for broadcasters, NAB advances the interests of our members in federal government, industry and public affairs; improves the quality and profitability of broadcasting; encourages content and technology innovation; and spotlights the important and unique ways stations serve their communities. For more information, visit nab.org.