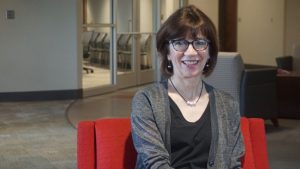 What made you interested in research in your field?

I was an attorney in a previous life, so the legal research connects that life with my current life. I became interested in historical research during my master’s at Arizona State. While I took an undergraduate class in the history of mass communication from Dr. Dick Lentz, the last true history course I had taken was in high school. At the time it seemed like all history consisted of was wars and dates. However, Dr. Lentz taught the mass communication class from a social and cultural perspective. I immediately fell in love with the stories and the detective work it took to reveal those stories. Dr. Lentz became my mentor and encouraged me to do a Ph.D.

What are some of the steps of your research process?

Like all research, historical and legal research starts with a question you want to know the answer to and moves into a review of the existing literature to find the gaps and provide context for the study. With both historical and legal, the primary sources are documents. Court decisions are used in legal research along with others materials such as legal arguments and letters. However, historical sources consist of written materials such as letters, diaries, memoranda, newspaper and magazine articles, and government statistics. The sources, whether legal or historical, are then carefully reviewed, analyzed, and interpreted.

What do you need for your research?

Curiosity is needed for all research, including history and law. Research also requires tenacity to keep digging for sources and answers even when you think you’ve hit a roadblock. Access to legal cases, usually through databases, and archives are vital. Without access to the primary sources, one cannot conduct legal or historical research.

Do you involve others in your research process?

I have collaborated with other scholars and students on research, but I tend to work alone. I’m an introvert and actually get excited about spending hours in the bowels of a library or digging through databases. Do your findings alter preconceived notions that you’ve had on a subject? Absolutely! All the time. Although researchers often go into a topic with a preconceived notion of what they will find, they have to have the ability to let the evidence take them where it leads. I’ve stopped working on topics because I didn’t find what I thought I would. The evidence just wasn’t there. I had to accept that and let the idea go.

Why is research needed in your field?

It is just within the last decade that the history of public relations has become a primary area of focus for mass communication historians. We know much more about the profession’s development today than we
did before. For most of the 20th century, it was believed that the field developed in a linear fashion – from press agentry to public information or publicity, to two-way communication – becoming more ethical in the process. This linear evolutionary model had a profound impact on public relations and shaped its theoretical development. To many public relations scholars, that model was simply too neat and tidy and too self-serving for those who promulgated it. Recent scholarship has debunked the linear model while looking at
the factors that influenced the development of public relations and how the field has changed and grown over the years.

Is there a particular conference that you enjoy going to?

My favorite conference is the American Journalism Historians Association. (A shout out to President Dianne Bragg and Caryl Cooper). AJHA was my first conference. I attended as an MA student, and the research chair that year took me under his wing introducing me to people and making me feel comfortable. Everyone who attends AJHA has a similar story about the first people they met and how they were mentored by them. I didn’t miss a conference for the next 15 years, even when my duties as director of the Plank Society could have kept me from attending. I am still an AJHA member though.

Dr. Gower is the Director of the Plank Center for Leadership in Public Relations. Her primary research interests include the history of public relations and legal issues impacting the profession, but she is also interested in public relations ethics, diversity and inclusion, and crisis communication. She has taught several courses for Public Relations, and she usually teaches APR Management for seniors.